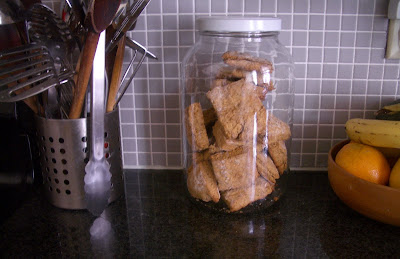 I have some South African extended family members and they have turned my father on to Ouma's Rusks. The rusks are similar to biscotti, but better. Idly paging through a cookbook left behind by a tenant, Sundays at Moosewood Restaurant, I saw a recipe for rusks. I was skeptical about the taste after enjoying Ouma's, but the directions included drying the rusks for 12 hours in the oven. I am a sucker for a strange recipe, so late one night (I'm not telling you how late), I set to work.

Turns out, the rusks are comparable to Ouma's and way better than homemade biscotti. We all love them and though the children are encouraged to dunk them, they do eat them plain, so they are good snacks. Rusks are moderately healthy, not too sweet, and scented my house for a full two days after they were finished (must be the long overnight bake). I hope you try them, and like them, too.

Rusks from Sundays at Moosewood Restaurant

Pour the wet stuff into the dry and stir until you have a soft dough, similar to biscuits.

On a well-floured surface, roll or pat the dough to 1/2" thickness and cut into rectangles (they suggest 2x4")

Bake at 400 on greased baking sheets for 25 minutes. Then pile the rusks together on a baking sheet and bake at 200 for about 12 hours. They should be very dry and hard. Keep in an airtight container - they'll keep for weeks.

My midafternoon cuppa. In honor of the rusk, I made bush tea. 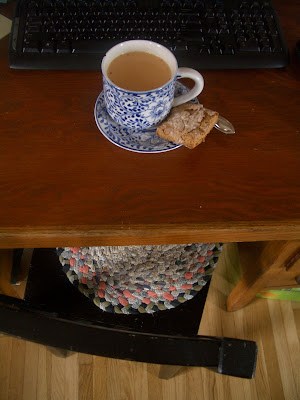 I've never even heard of rusks. Thanks for the lesson and the recipe. Back in the fall I tried making biscotti for the first time... it was break-your-teeth-hard. Overall it was an experience that has left me wary of trying twice-baked cookies, but I think you've convinced me to try these.

Hmmm... I think your sister needs to conduct a professional taste-test to see if said rusks past the Ouma test..:) You might find some willing buyers since one can only pack so many boxes of rusks in a suitcase when traveling home from S Africa!

Hi Margo, Crystal (a mutual friend of ours, no?) pointed me to your blog and I've been having a fun time perusing your culinary and homemaking adventures. I like your clear-cut, smooth style---both the photos and the writing.

I'm planning on making these rusks this week...

Would they be just as good if I had to omit the almond extract? I'm making these for the first time for my daughters international night at school this week but my daughter has a severe peanut/tree nut allergy. She wanted something snack like and traditional for South Africa.

Anon, I'm quite sure the rusks would be fine without almond extract. You could add a different extract if you wanted to. Enjoy your international night!