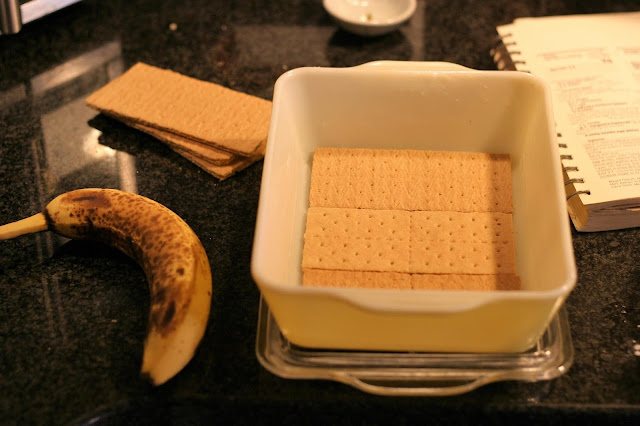 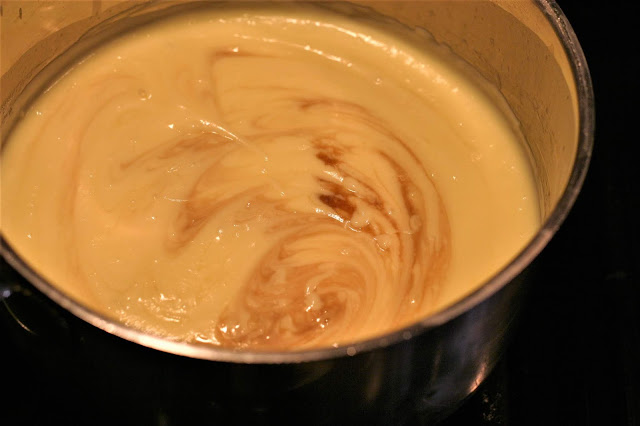 Seems to me, banana pudding lovers have a favorite recipe, usually an ancestral one, and mighty strong opinions on the subject.  I simply wanted to use up some brownish bananas that my family was ignoring.  I wanted something fast and delicious using what I had on hand, so I mashed up a few recipes. 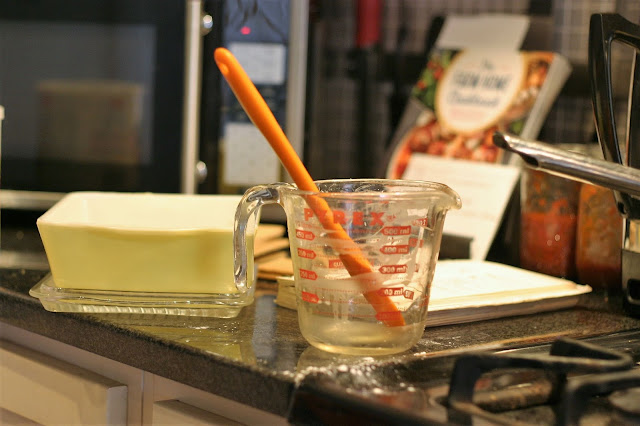 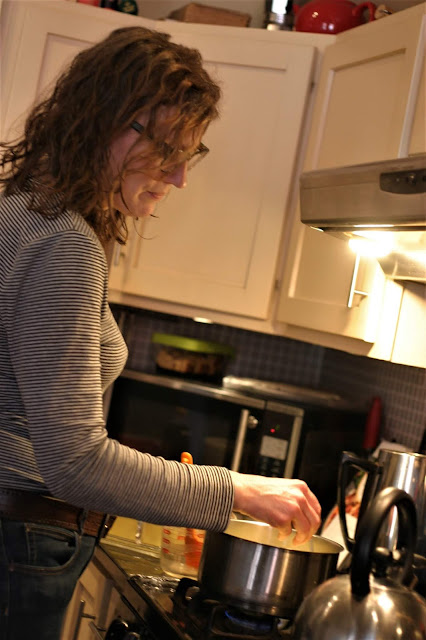 But the recipe turned out so well, I'm making it again on purpose and sharing it with you!  Maybe this is the start of a banana pudding loyalty in my family? 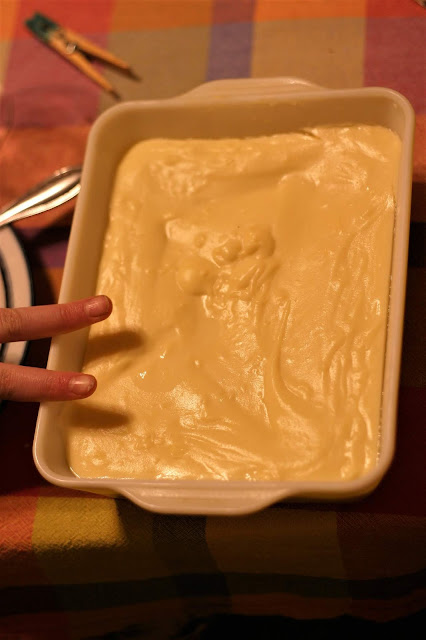 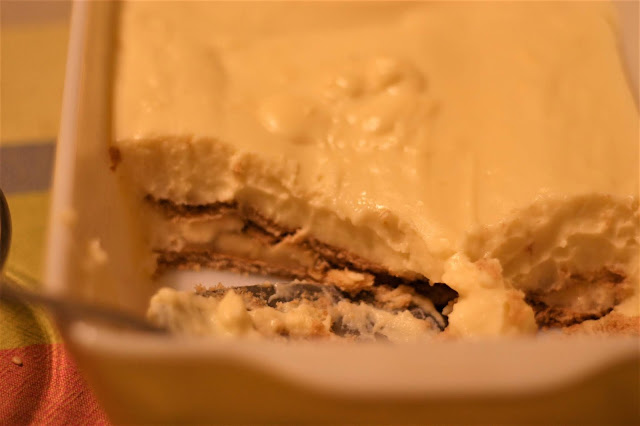 Pour a little hot milk into egg mixture, whisking.  This tempers the eggs.

Now turn heat to low.  While whisking milk mixture, pour egg mixture into the saucepan slowly.  Whisk continuously.  When the egg mixture is totally whisked in, turn the heat up to med-low and whisk continuously until it comes to a slow boil.  Allow to boil 3-5 minutes, still whisking. Should be quite thick, basically pudding, after the boil.

Take pan off heat and add 1 tsp. vanilla.  Set aside for about half an hour which allows it to cool a bit.

Assemble. Lay 3-4 graham crackers in bottom of lightly greased 8x8 dish or equivalent. Slice a banana over the crackers.  Add another layer of crackers.  Pour the still-warm pudding gently over the top layer. Cover. Refrigerate for several hours - best eaten within 24 hours because the bananas will inevitably turn brown.

Notes: Use 2 cups half-and-half in place of milk and cream.  I'm sure you could double this recipe.
You could add some nutmeg somewhere. . . or use chocolate graham crackers or Nilla Wafers. . . or put whipped cream on top. . . or what else?  Are you a banana pudding fan?  How do you like yours?

Of course, Phoebe's preschool is going to do valentines.  Phoebe and I took some time one day to make valentines, and I used what I had on hand: construction paper, lace and rick rack, and a red stamp pad (borrowed from Genevieve - she has a serious craft stash!). 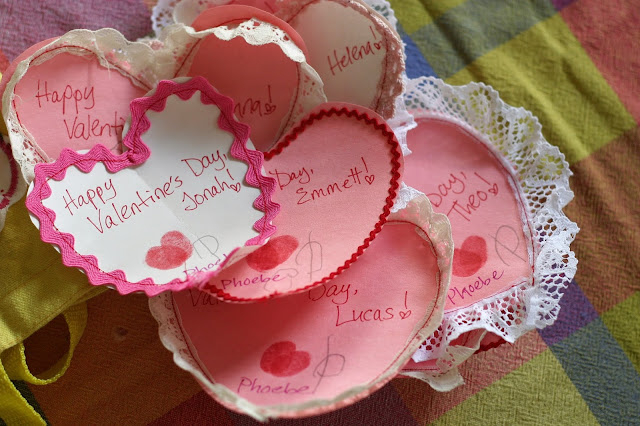 I first tried hot-gluing the trims to the hearts, but it was tedious and fraught with glue-strings. So I put an old needle in my sewing machine and sewed those babies up.

I used Phoebe's thumb in the red stamp pad to make little hearts on each paper heart. To be frank, that part didn't go well, and I should have stayed with my policy of letting my kids design and execute their own little projects.  But Phoebe does love the resulting valentines, and even put her own "P" on each one. 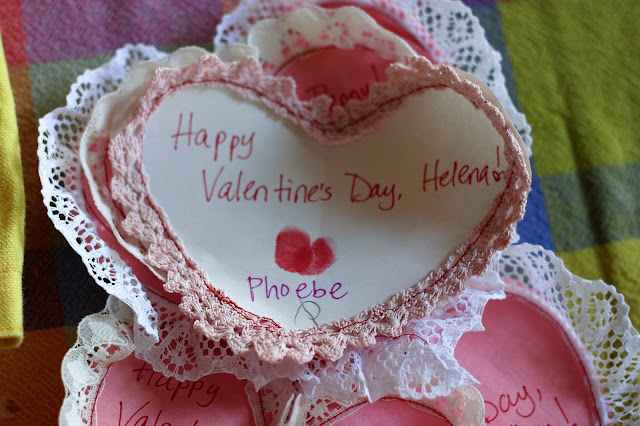 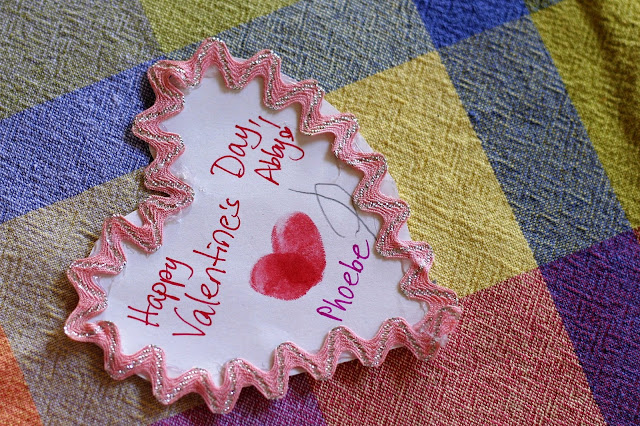 But in general, Phoebe is confused about what exactly is happening with these valentines.  We'll see how it goes at preschool today and what she comes home with!

In keeping with tradition, I made a little valentines' carrying bag for Phoebe (Ben's bag, Genevieve's bag). Luckily we had a plain yellow bag in the bag cupboard, and I just picked through my piece bag to make some fun hearts. 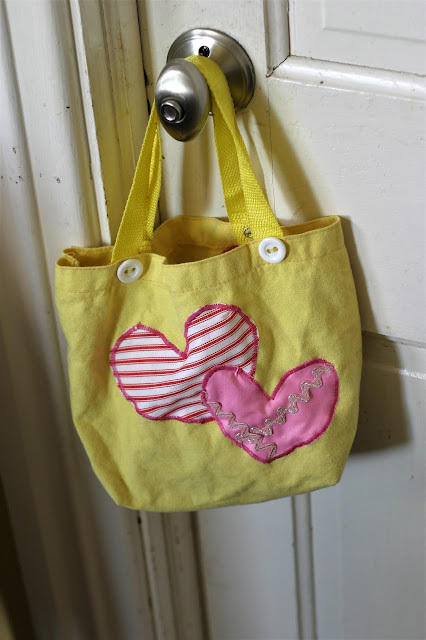 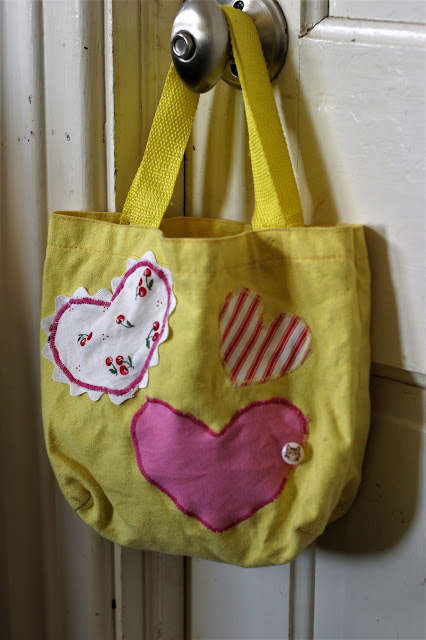 I also made Phoebe these mittens recently, and they are a scream. Phoebe and I had a serious artistic discussion among the bolts of fleece at Joann's Fabric.  I told Phoebe she could pick a fleece that wasn't too light and would go with her red winter coat.  She studied the bolts, we pulled out a number, rejected the ones that wouldn't work, and ended up with this mint-colored fleece. I love seeing my kids develop their personal taste!  The lady at the cutting counter admired the sloths and Phoebe looked at her reprovingly, "they're kitties!" 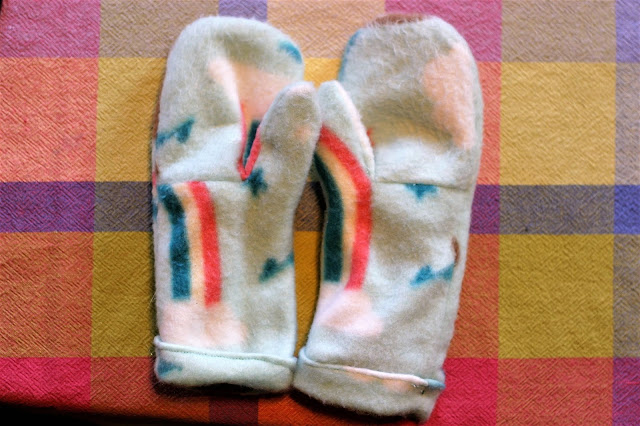 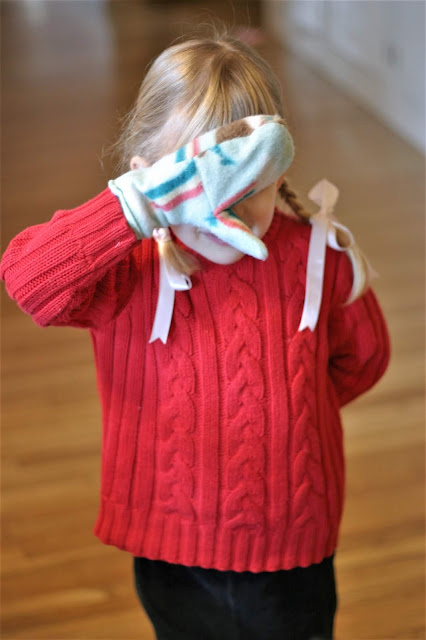 I used the Purl SoHo pattern, although I sort of free-handed a child-size paper pattern.  I made a test mitten and had to adjust the dimensions.

However, even when the sloth mittens were made, they needed some tweaking.  Phoebe said her hands were still cold, so I made a second pair of mittens and inserted them inside to make lined mittens.  Also, the mittens were literally falling off Phoebe's hands, so I put some elastic at the wrist to help them stay on. 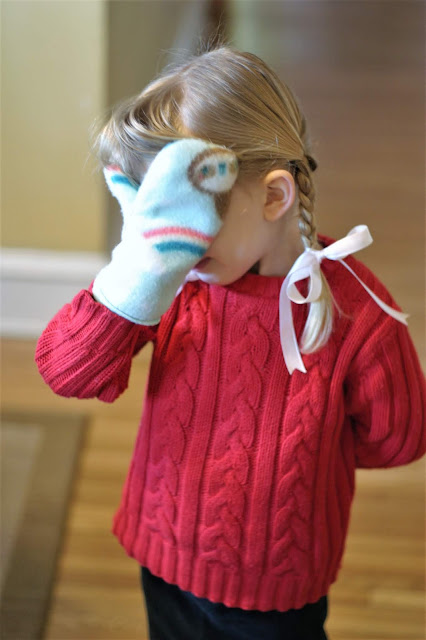 Now, finally, the mittens do what they're supposed to do.  And they make me laugh every time!

Happy Valentine's Day to you all, in whatever way you celebrate or not.
Posted by Margo at 12:37 PM 5 comments:

I took some oddments of sock yarn and made Phoebe some wool socks. 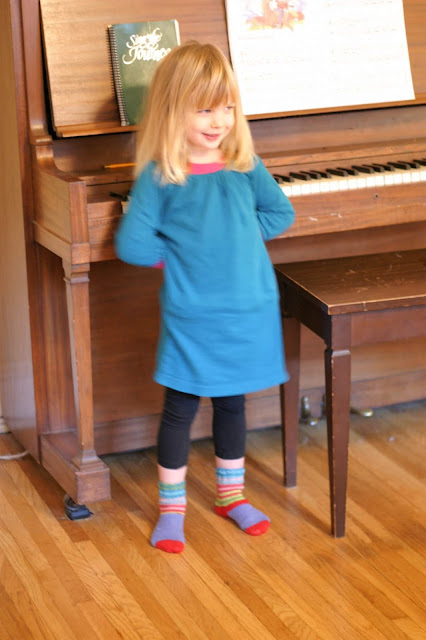 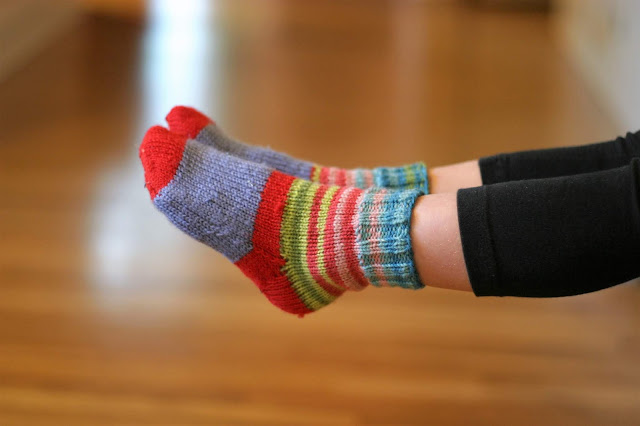 I aimed to make the heels and toes red, but I colored outside the lines on the one sock.  And also, this is some vintage sock yarn I picked up somewhere, and I think it's a little fragile.  I caught the sock unraveling in two red spots, where I joined the red to another color.  Or perhaps the socks are already wearing out because Phoebe has worn them almost non-stop? 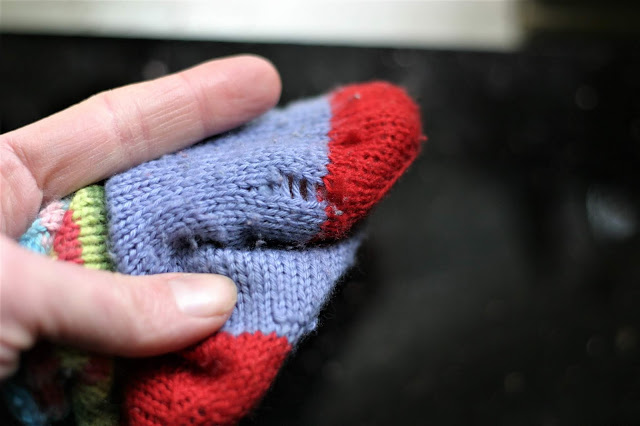 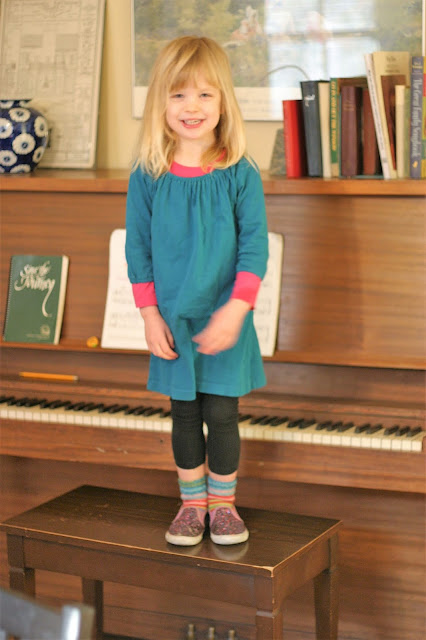 Phoebe is suddenly so much taller that her pajamas were inches too short at wrists and ankles.  When I asked her if she'd like a nightie, her face lit up and she asked if she could wear it that night: I had yet to even search out a pattern and fabric! 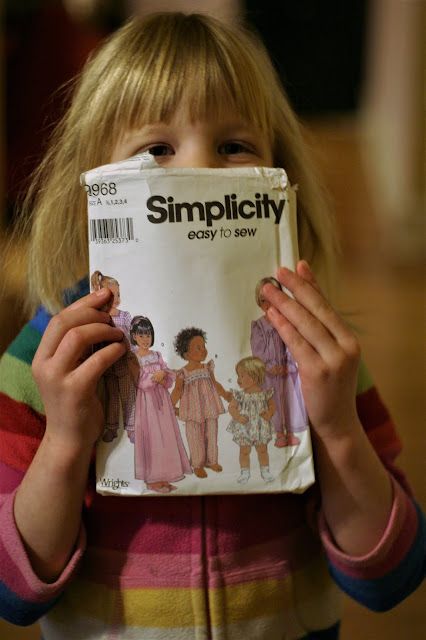 But the nightie was fast and easy, and Phoebe has rarely slept in anything else since it came off the sewing machine. 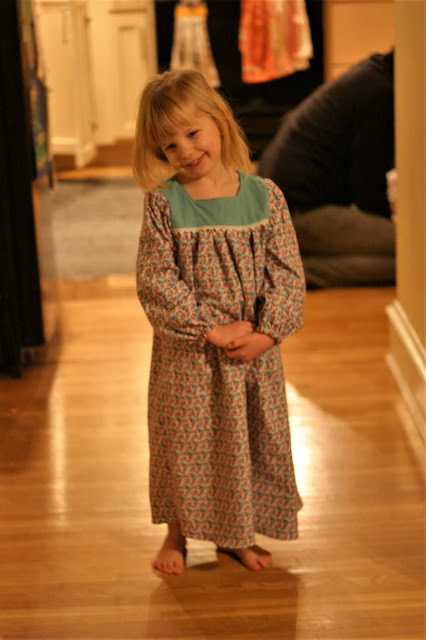 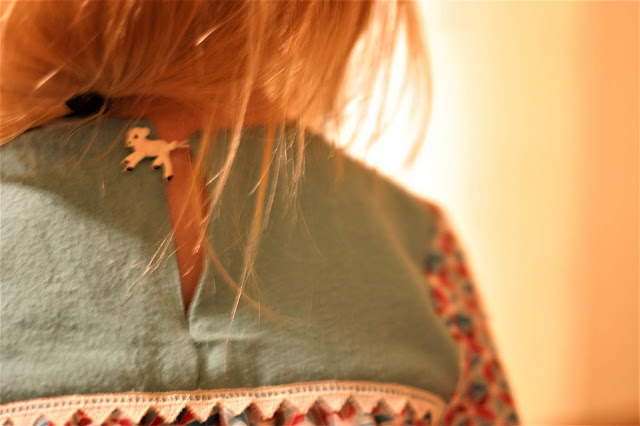 I let her choose a button - she chose a lamb.  She's my little lamb! And look at my precious 6-year-old Genevieve in a nightie from the same pattern.  Little girls in nighties - so dear. 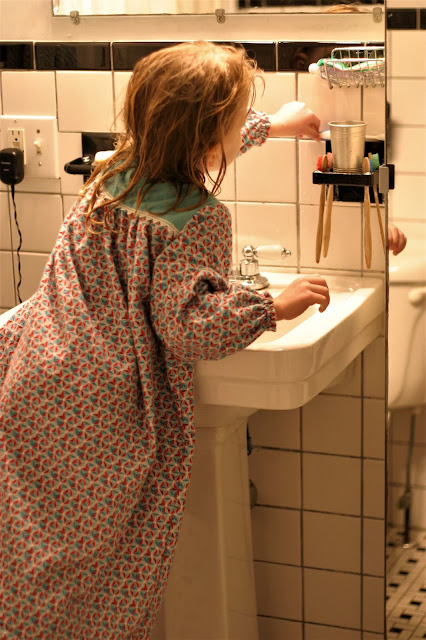 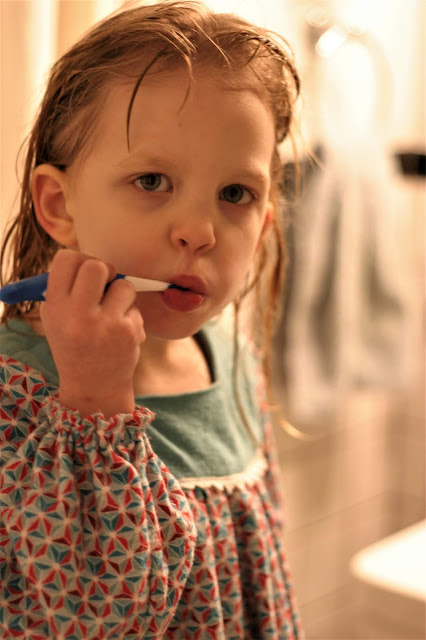