I mentioned kale stem pesto when I wrote about Linda Ly's book. So I recently had collard greens and I decided to see if I could use their woody stems to make pesto.  I did whiz the stems first by themselves in the food processor, but then I added walnuts, Parmesan, garlic, salt, a handful of whatever herbs I found in my garden, and olive oil.  Delicious!  Not woody at all. 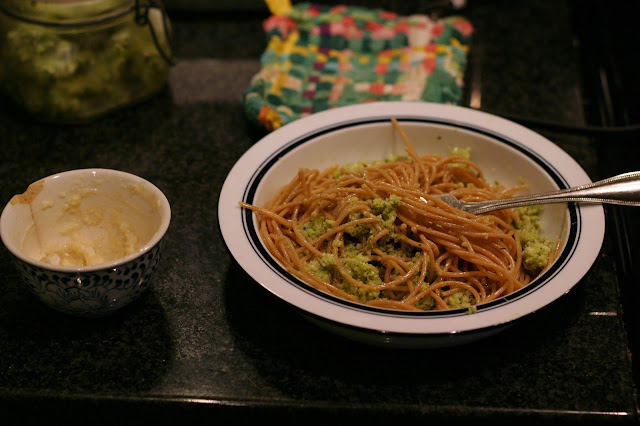 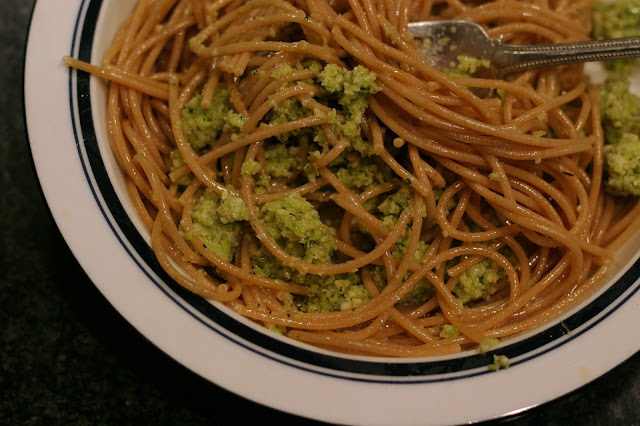 November has been very mild, hence the presence of herbs yet in my garden.  I'm going to experiment with the pesto again and see if the lack of fresh herbs still makes an agreeable pesto.
Posted by Margo at 9:47 AM 5 comments:

Email ThisBlogThis!Share to TwitterShare to FacebookShare to Pinterest
Labels: kitchen tricks, making do

A Wee Shawl for Phoebe 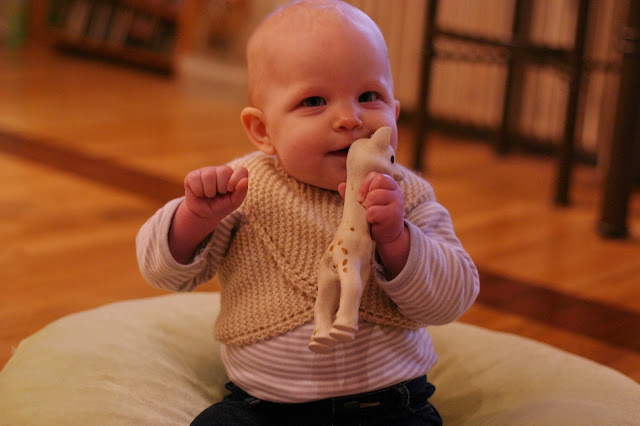 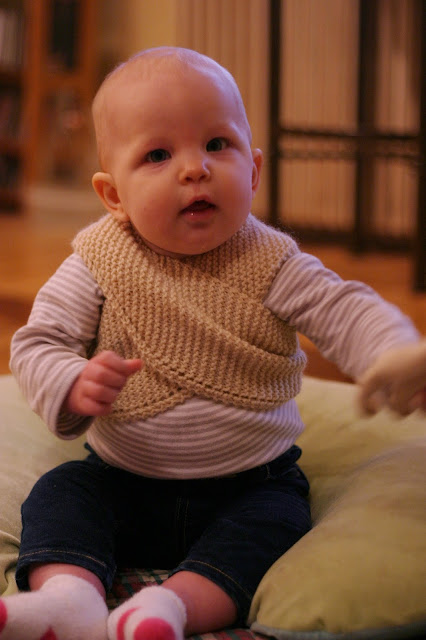 There were some similar patterns on Ravelry, but they were all beyond my abilities or patience to increase said abilities. I boldly struck out on my own and I think it worked (and I wrote the details below in case you want to try, too)!  But Phoebe keeps growing, so I'm not sure how long it will work. 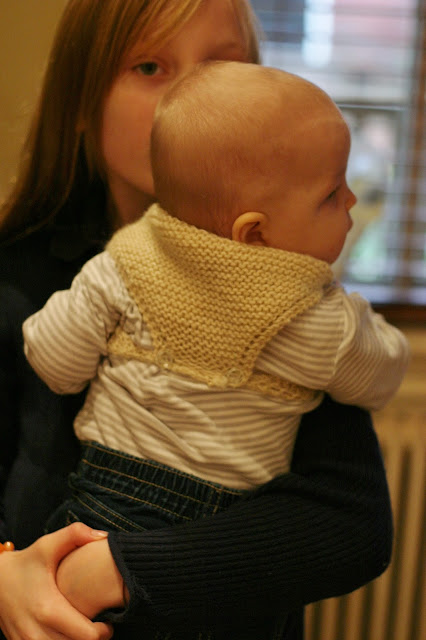 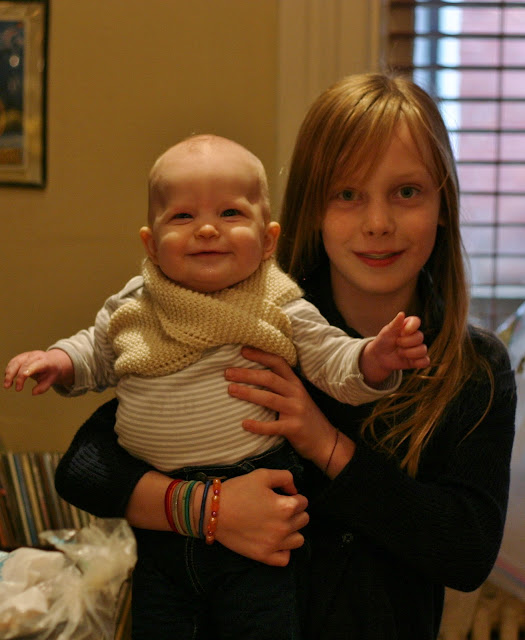 (not a "pattern" - please, I am not at that level yet!)  I used size 7 needles and medium-weight  (is that called worsted? confusing) wool yarn that I got for a song at the creative reuse shop.

I started a dishcloth, which means I cast on 4 stitches.  Knit all 4.  Then slip one, knit one, yarn over, knit the rest of the row.  Then repeat this (which adds a stitch every row while creating a picot edge) until you have 75 stitches. 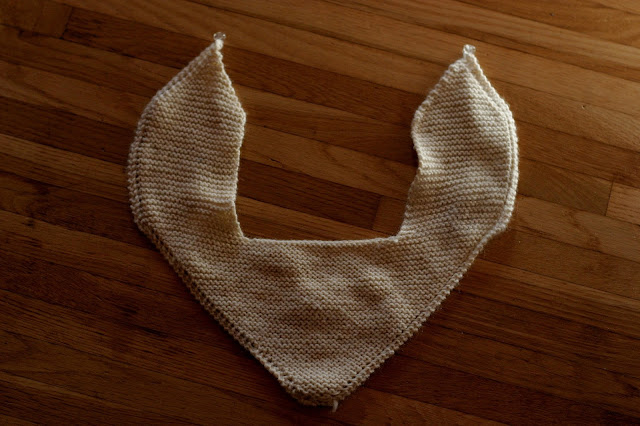 Sew buttons on the wing tips.  Wrap around baby with the wings going under her arms, to button on the point of the vee at the back.  Adorable and warm.
Posted by Margo at 2:09 PM 8 comments:

Four Heads for the Crock

I got five enormous heads of cabbage from market - I think the farmer charged me $1.50 a head.  I shredded and shredded and shredded cabbage on the mandoline slicer I borrowed from a church friend. (My shoulders and arms were sore the next day and I couldn't figure out why at first!) 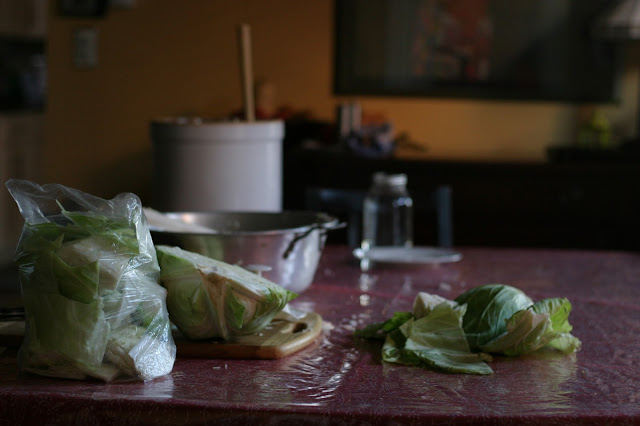 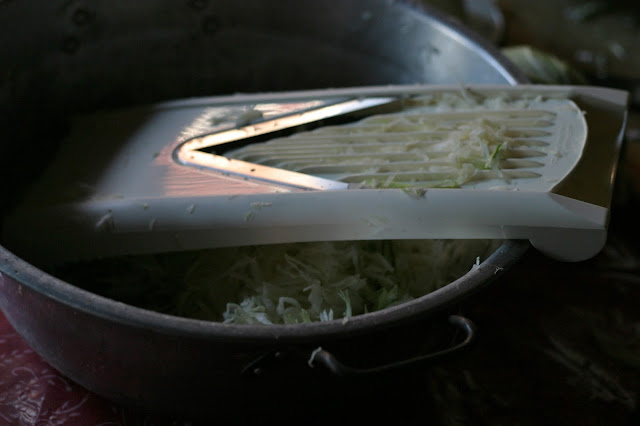 So yes, the crock took four heads of shredded cabbage, pounded down with my meat mallet, to get filled up. I salted the layers as I went. 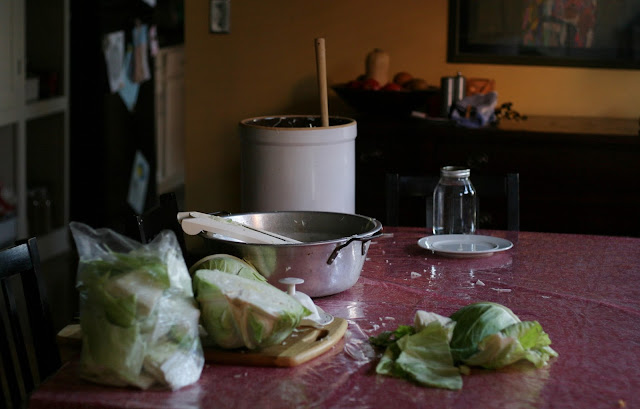 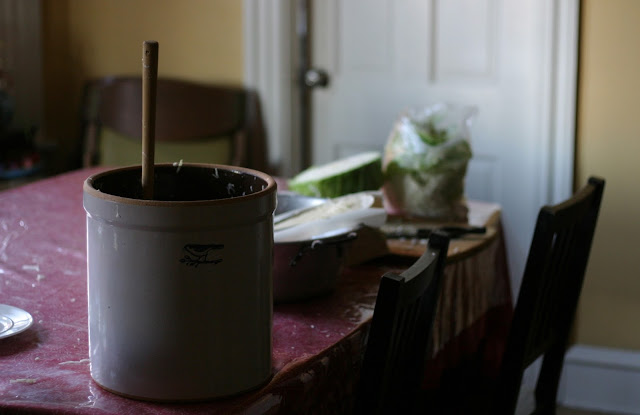 I put a plate on top, weighted it with a quart jar filled with water, and covered the whole business with a tea towel.  My husband carried it down to the basement and it will ferment for several weeks before we start tasting and enjoying.  I'm curious to see what Phoebe thinks of sauerkraut!
Posted by Margo at 2:27 PM 14 comments:

Email ThisBlogThis!Share to TwitterShare to FacebookShare to Pinterest
Labels: fermentation

Do you want to get some fresh air in your lungs to drive out the germs your people bring home? 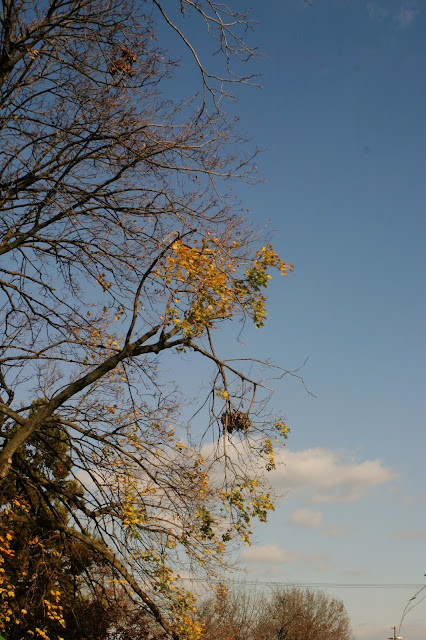 Want to get some sunshine in your eyes, some mood-boosting Vitamin D delivered without a pill? 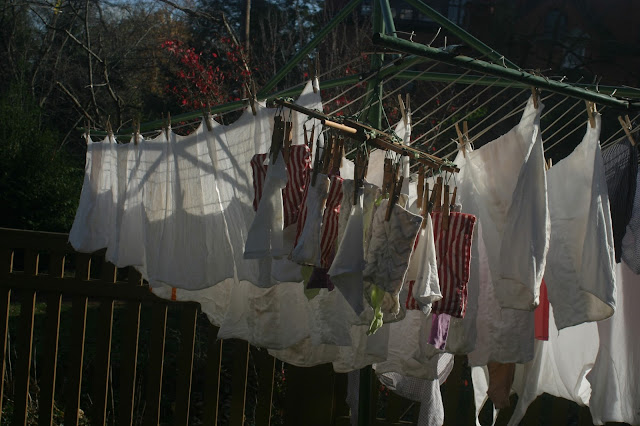 Want to use a free bleach alternative with no chemicals? 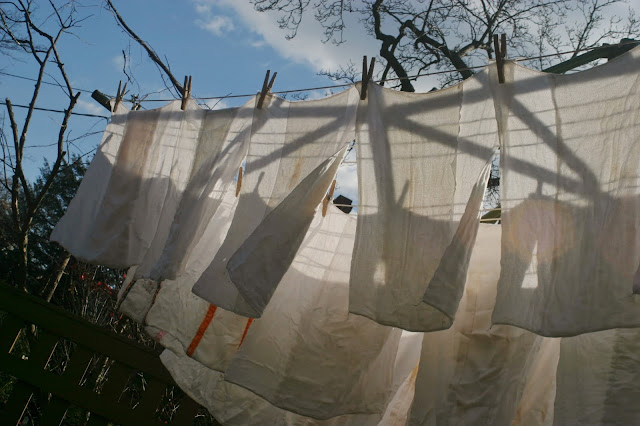 Want your laundry to smell fresh and delicious and utterly clean? 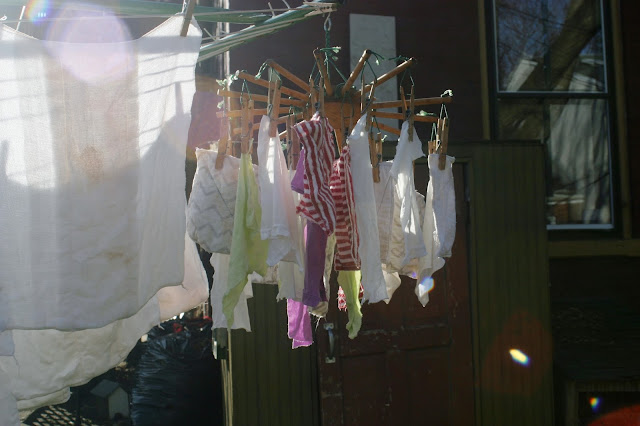 Want to dispense with an appliance, get that square footage back, reduce your utility bill, and reduce your carbon footprint? 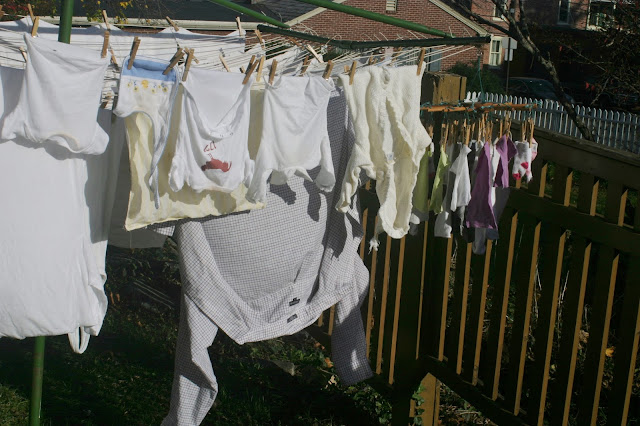 And do you want to do all these things simultaneously for real super-efficiency? 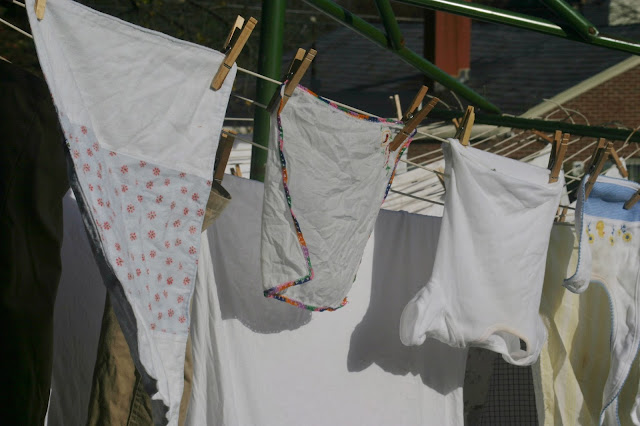 So now I am looking for ways to keep the baby warm with materials I have on hand.  And I have been slightly obsessed with knitting!  This may be due to a bout of  tendonitis in my thumb joint (less hand sewing), the relative speed of tiny baby knits, and the convenience of a friendly teacher to call on. 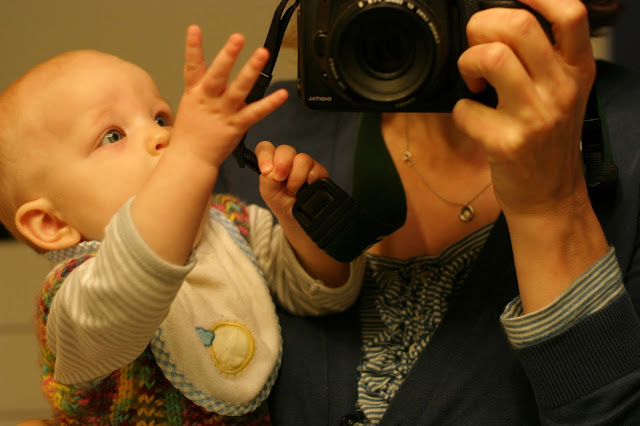 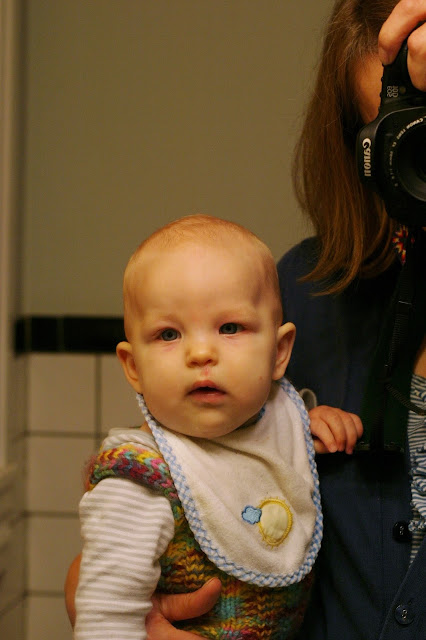 I used some yarn I had on hand that I hope has some wool in it to make this little vest.  The idea is to keep Phoebe's core warm without wrestling and shoving her arms into two sets of long sleeves.

I used this tutorial, but I cast on 36 stitches and used 20 for the neckline and 8 for each shoulder.  I also did not use the fisherman's rib because I didn't recognize all the methods and I was too impatient to go to my teacher or You-tube; I did a knit-2, purl-2 rib.

I was pretty proud of myself for figuring how to segregate the groups of stitches to make the neckline! 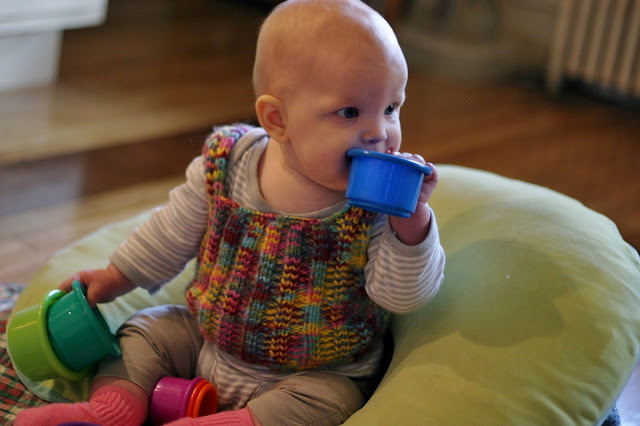 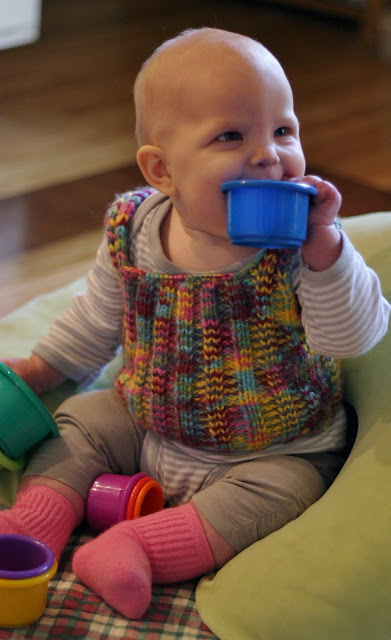 However, when it was time to sew up the side seams, I realized that the vest was rather narrow for Phoebe's chub.  So I knitted two little panels (I think 12 stitches wide - maybe?  it took me a while to get photos of the vest in action, and I've knitted other things in the meantime) and then added one panel under each arm.  This is only obvious is you take your eyes off the sweet baby face above the vest. 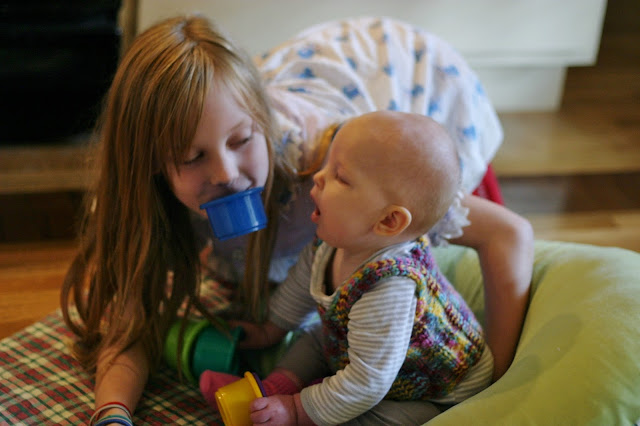 More vests coming soon!
Posted by Margo at 9:50 AM 9 comments: