This photo is the result of my obsession in November for having a family photo to send out at Christmas.  Obviously our visions did not align, but it's funny to me (now). 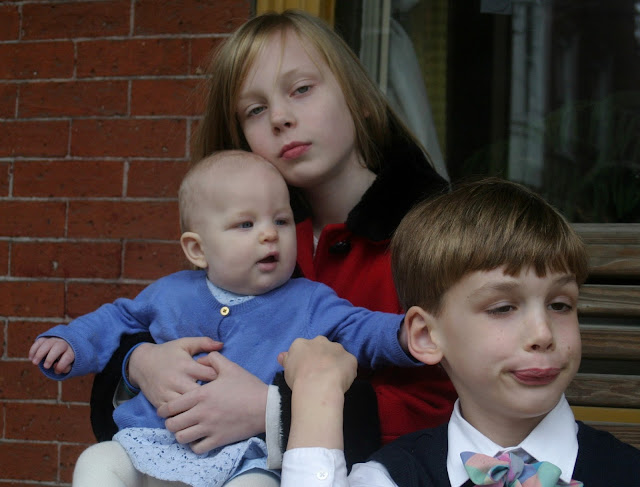 Merry Christmas to all of you!  Thank you for making this blogging thing so much more fun and meaningful.
Posted by Margo at 6:53 AM 13 comments:

The Green Side of the Cushion

Remember this patchwork cushion cover that I made?  I asked you to help me analyze why the one side did not look good.  You gave me some suggestions, and I ultimately added some more hand quilting.  That side was still unattractive to me, so I kept the rich red side flipped up. 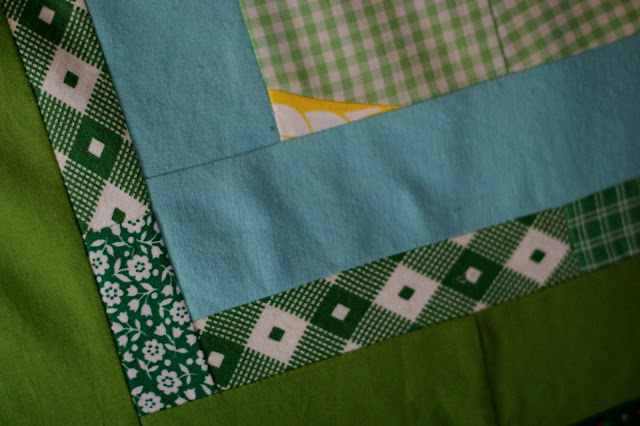 Little by little, my desire grew to just replace that strange side entirely, so I began to daydream/design in off moments. 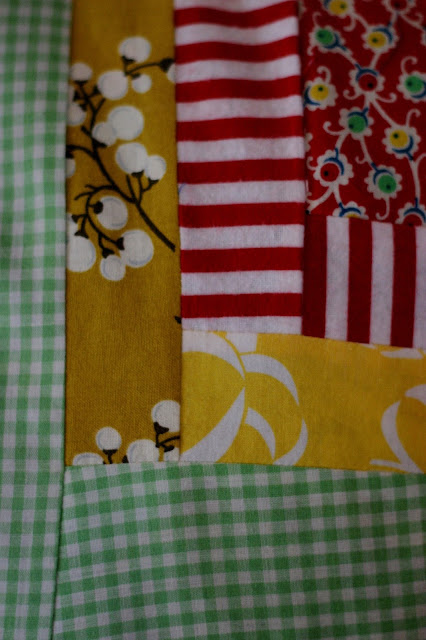 So a few weeks ago, I  was able to whip up a green patchwork square with a red corner (the color opposite of the red side).  It was so fun!  I limited myself to my small scraps, hence the piecing within the strips where I sometimes stirred in another harmonious fabric.

Then I took apart the cushion cover and put in the new one. 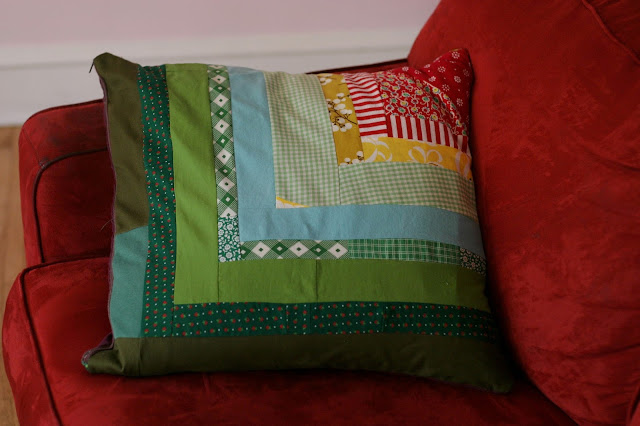 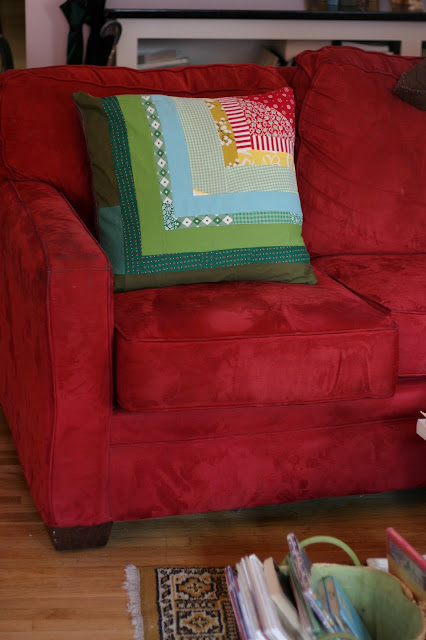 I love the results.  It makes me happy just to look at the cushion, either side!
Posted by Margo at 6:12 AM 3 comments:

It's hard to believe that dill pickles and peanut butter taste so good together.  Yes, I am not kidding.  My friend Naomi came over to grind some peanut butter on our machine and exclaimed that it would make a delicious peanut butter and pickle sandwich.  What? What?  She patiently explained to me that it's delicious and the best pickles to use are dill.  I knew I had to try it once - it's weird and I am always intrigued by unusual food.

I couldn't believe how delicious the combination is!  I'm not sure I can explain it either - it's almost meaty, but rich, too, and then the zip of vinegar.  Have you eaten this sandwich before? 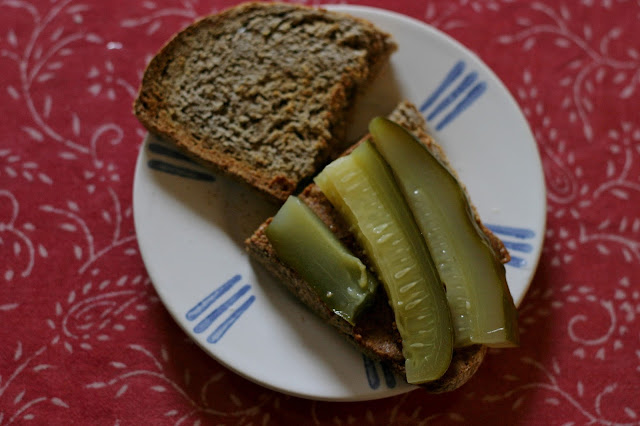 My family's reactions were mixed:

Husband: I can improve this.  I think it needs more of an Indian pickle, to take it in a groundnut stew direction.  Yes, I think those are the flavors that it should be going for.
Genevieve:  No thanks, I won't taste that weird combination.
Ben:  Yum!  I want more!
Phoebe:  FOOD.  More FOOD. 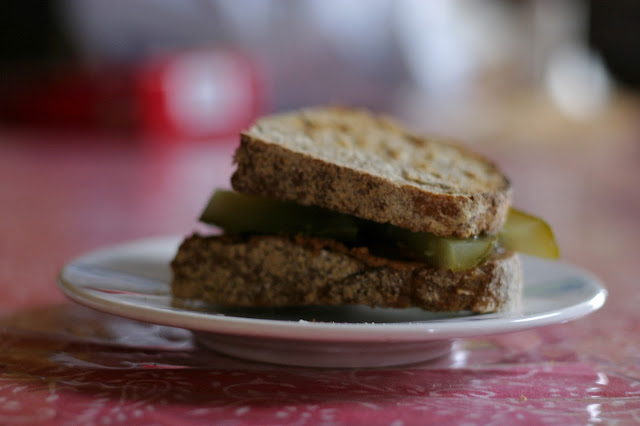 I know there are other weird sandwich fillings out there - I seem to recall mention of banana and mayonnaise. . . ?  Maybe?  Or peanut butter and bologna . . . ?  What are they?  All these years I have dismissed strange fillings as not worth remembering, only to find out that peanut butter and dill pickles are delicious together.  What other odd couples am I missing?
Posted by Margo at 5:38 AM 19 comments:

I cannot tolerate all of December being overtaken by Christmas.  I can't  control what goes on outside our house, but I really tamp it down inside. Even Advent is getting on my nerves this year and I like the concept of waiting and reflection in theory, but in practice, I just want a cozy winter without all the Christmas decorations! and sugar! and glitter! and shopping! and events!  I know some people think winter is boring without Christmas, but I find the revved-up pace of commercial Christmas hard to sustain or enjoy. 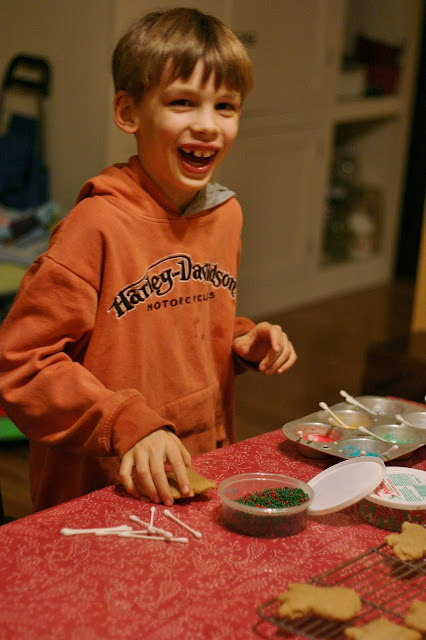 So, a few days ago, I got out our collection of Christmas music.  We made one batch of Christmas cookies and I let the kids paint them with a simple cookie paint glaze.  We got a Christmas tree (so much different from last year!  I got to choose the tree entirely - it is slim and elegant; Mr. Thrift had to jury-rig the tree stand since last year's behemoth crushed it, so the tree can only stand straight since it's wired to the wall).  I let the kids decorate the tree entirely - they broke two ornaments and fought most of the time.  I have already announced (yelled) that we are not getting a tree next year because it was so unpleasant.  Humph. 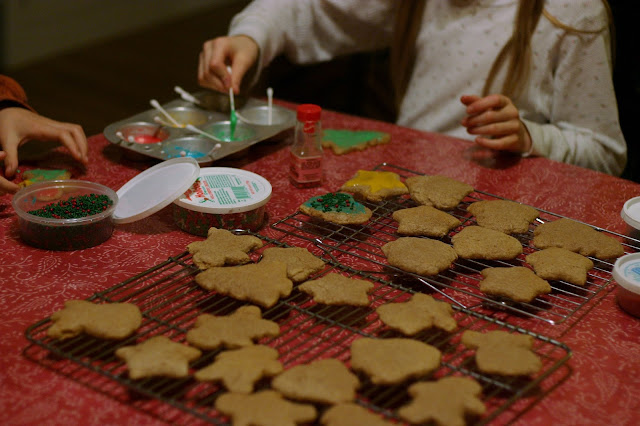 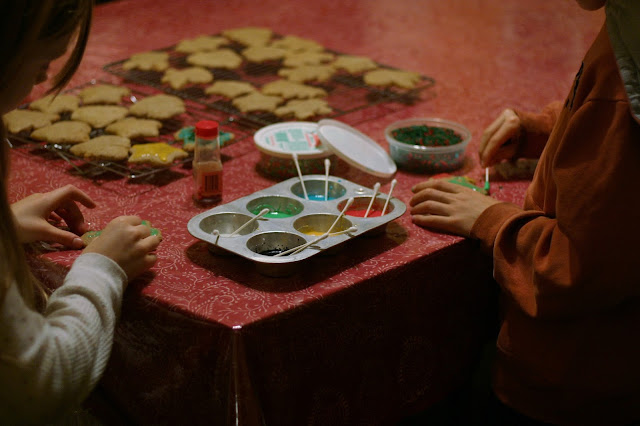 The big kids had already set up the manger scene by themselves, I had hung the stockings earlier and they are filled.  We ate homemade St. Lucia buns on December 13, and I have Grandma's Christmas bread tucked away in the freezer for Christmas morning. Well, I guess we are getting rather Christmassy around here! 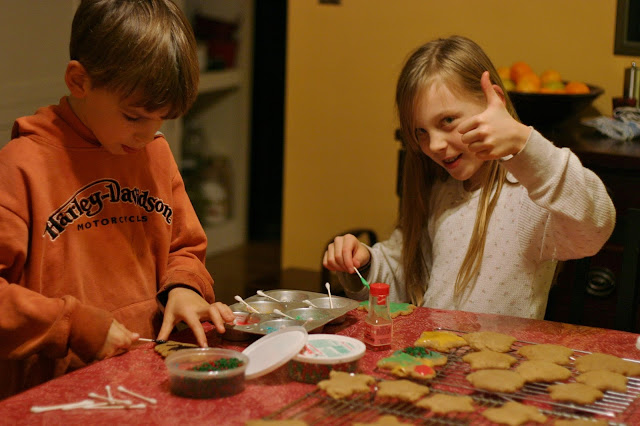 In Which I Steek

I knitted a pair a mittens for Phoebe and there were several problems with them (my fault, not the pattern).  First of all, the weather has been so warm that no one has been wearing winter coats, let alone mittens.

But the mittens were just too narrow for Phoebe's hands.  I was keeping the yarn tight as I knit to make the mittens more windproof, but alas, the mittens had little stretch for her hands and she fussed a lot when I tried to jam her fingers beyond the cuffs. If this was a sewing project, I could fix it any number of ways, but I was truly stumped and sad because I thought all my time had been in vain and the mittens would have to go (where?  who could appreciate my hours of labor and also knew a narrow-handed baby? ) and my baby would still have bare hands.

Fortunately, global warming kept the weather on my side as I walked the kids back and forth to school little or no wraps and suddenly, in walking, I hit upon a solution! 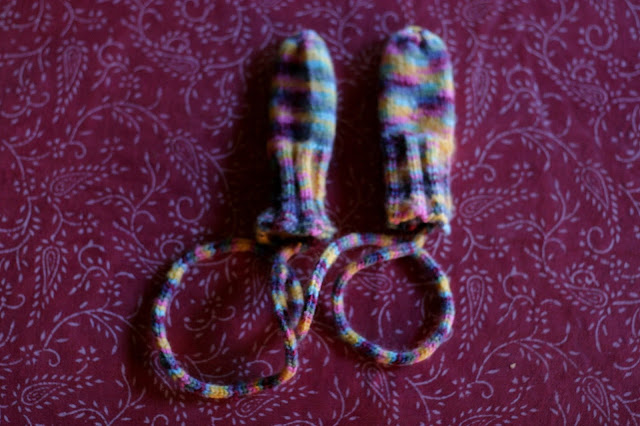 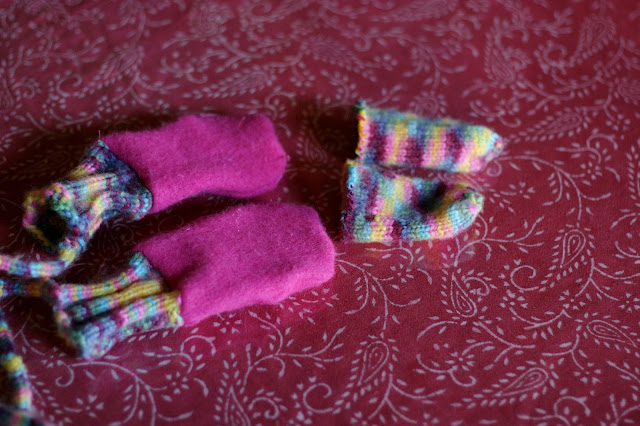 I steeked the mittens.

It was staggering to just cut them apart, but I did it because what did I have to lose? I cut off the narrow stockinette tops and then I used my sewing machine to zig-zag the scarily loose edges of the ribbed cuffs.  I attached new mittens made from a fuschia felted wool sweater.  It worked!  I was elated.

Phoebe wore her mittens on the chilly walk to school this morning,  Success!  Also, I really enjoyed knitting the i-cord that keeps the pair together.
Posted by Margo at 1:56 PM 7 comments:

We have a new person in the family, and so we needed another Christmas stocking (not that Phoebe is going to get gifts this Christmas - she will only be 8 months old).  To goad myself, I threw the old stockings away last January, with the intention of making new stockings well before this Christmas. I cleverly remembered this goad a few weeks ago. I briefly abandoned stockings entirely, but oh my word that didn't last long because the children consider this A Tradition and furthermore, Ben considers a soft fuzzy stocking A Tradition and he shed tears over his missing stocking.   It is always a mystery what details of family life the children will latch onto as Traditions! 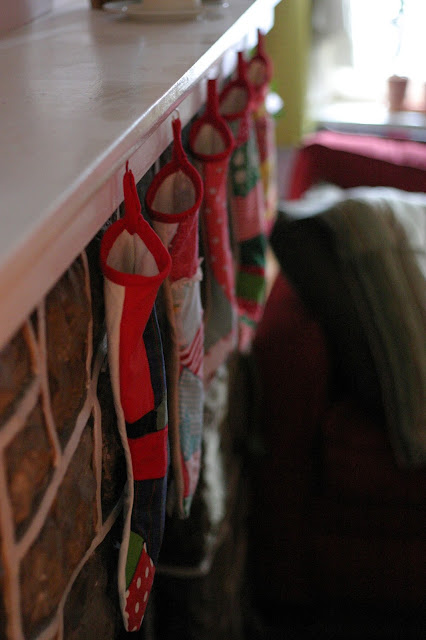 I didn't have any fleece left from the previous stockings, nor was it a smart choice because of its stretch.  So I returned to my favorite medium of thrift and creativity: patchwork. 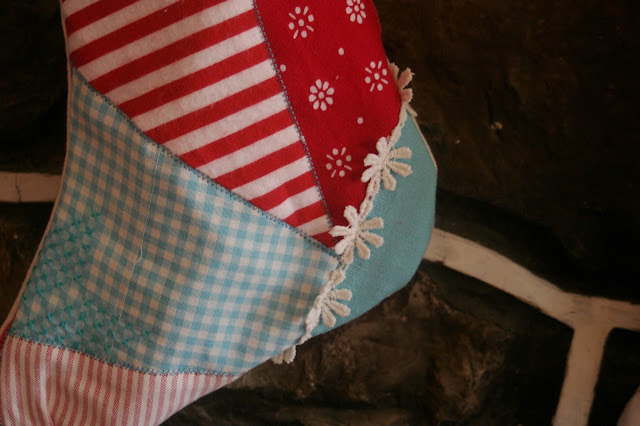 After a lot of rumination, I decided to identify the stockings by each person's favorite color.  So the patchwork is mostly red, a little green, and then a few splashes of the person's color.  I chose yellow for Phoebe ("but Mom, what if she has a different favorite color?!").  Ben has green, Genevieve has pink, I have turquoise, and my husband has black and as plain as possible. 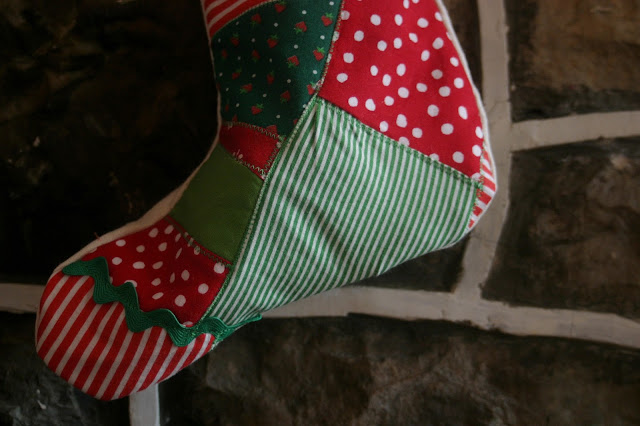 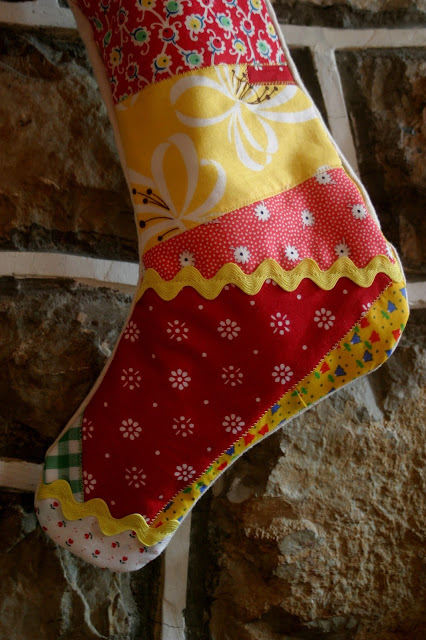 I made the pieces of patchwork, cut them down to the stocking pattern (which I drew, smaller than the previous ones because big stockings are hard to fill in a meaningful, non-junky way).  Then I laid the patchwork stocking on a piece of unbleached canvas and stitched each seam, "quilting" it to the canvas.  I slipped in a few pieces of rick-rack on the kids' stockings and a piece of lace on mine, but nothing, no nothing on Mr. Thrift's stocking.  Then I used more plain canvas for the backs. 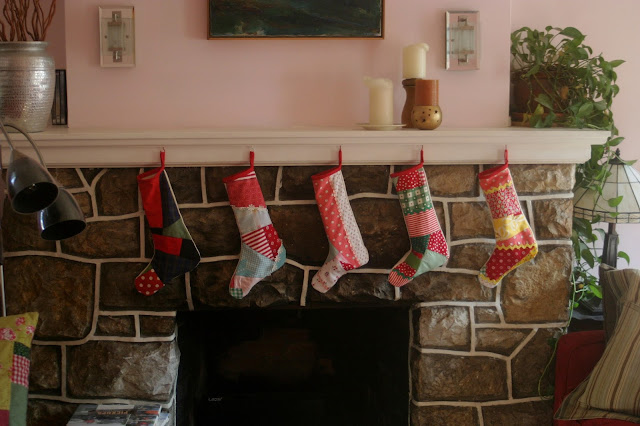 Ben was still severely, vocally, disappointed in his non-soft stocking.  I had to pick up some red double-fold bias tape to finish off the tops and wouldn't you know, when I flew into the tiny crazy sewing shop downtown to buy some, all they had in red double-fold was fleece binding.  Fleece!  I didn't know fleece binding existed!  Ben was placated with the soft top of his stocking, I was relieved, and the stockings are hung with care.  And some of them have delightful lumps in them already.
Posted by Margo at 9:45 AM 18 comments:

There seems to be two extremes of baby toys:  the cheap plastic crap with screaming colors and patterns all over every inch (we have some of these) or the gorgeous handmade toys of natural materials that cost more than my wool coat (we have three of these - all gifts). So I thought I'd try to find my solution with an internet search and some at-home materials. 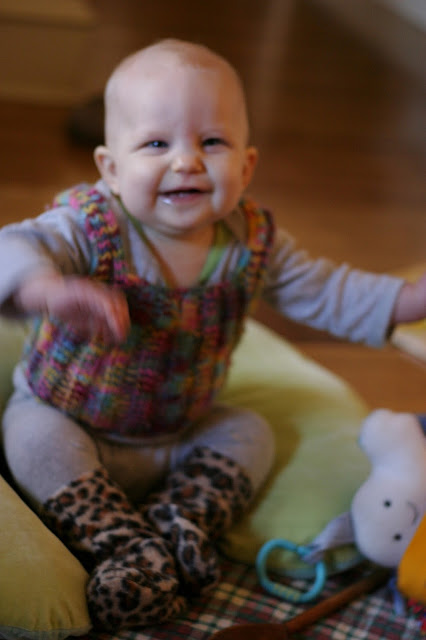 I actually made these toys a few months ago, but they went immediately into heavy usage and I forgot to blog about them.  That's my project theme these days:  immediate usage and I don't document them.  I'm going to try to remedy that in the next few posts.

This is a bottle with half baby oil and half water, plus food coloring.  It's fun to shake it and watch the bubbles foam up and disperse.  The big kids adore this thing. 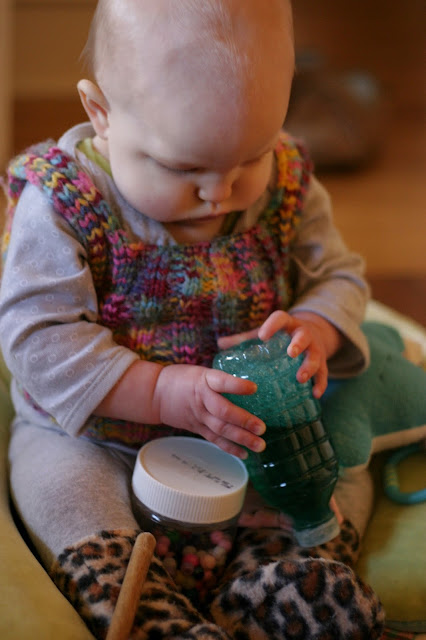 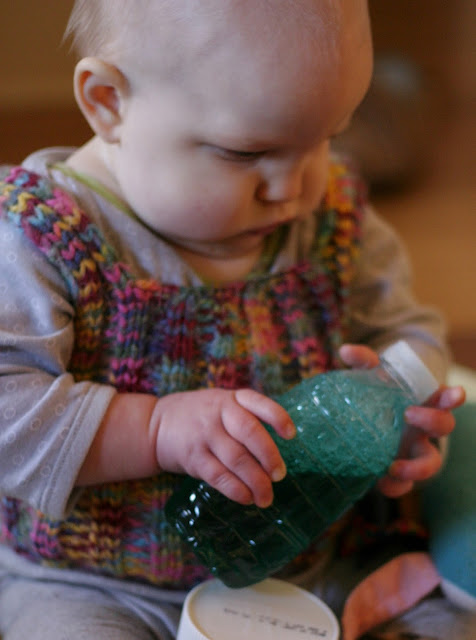 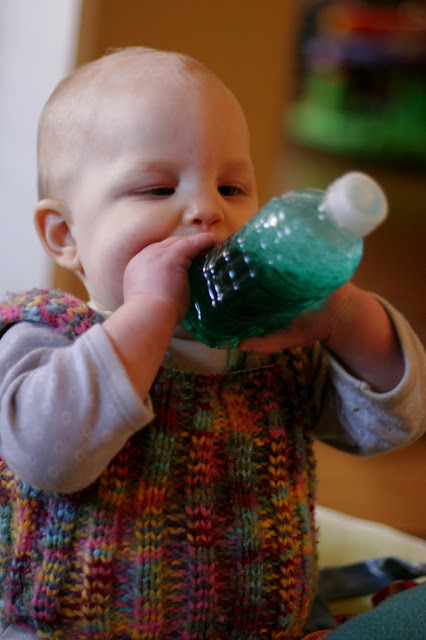 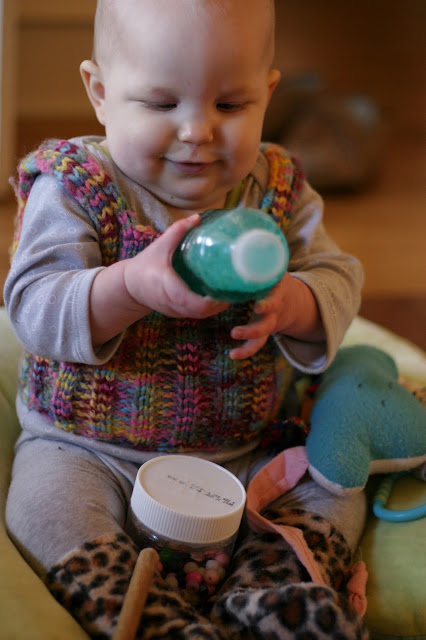 This is a shaker made from a plastic jar cadged from the recycling bin and the random beads and bobs I find on the kids' bedroom floor.  I put a jingle bell in there, too.  I glued the lid shut on both these containers for extra security, but my glue job was a little shoddy so I'm not sure that it's good to let Phoebe put these in her mouth.  She puts everything in her mouth.  So I guess I'm not picky about what the third child is putting in her mouth. 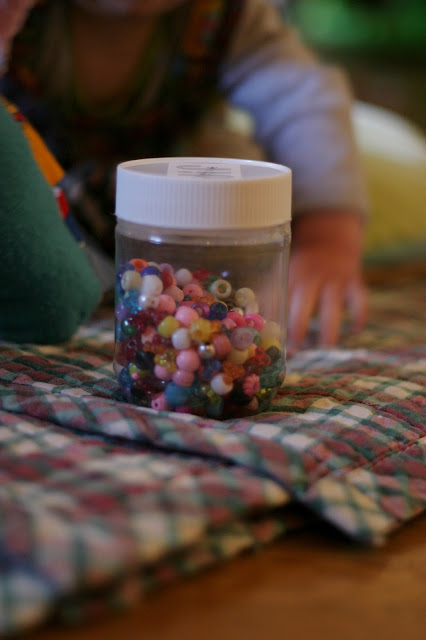 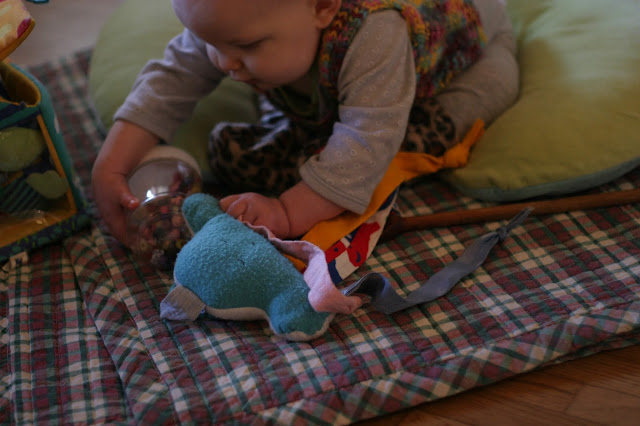 This is a cloud softie - I was so surprised to find myself making a stuffed toy!  I never had any desire to make dolls or animals, but this cloud idea with its sleep face and smiley face was pretty fun.  Again, my workmanship was a little shoddy (my approximation of ladder stitch to close up the hole after I stuffed the cloud is, uh, lumpy, and some of the seams on the dangles are coming out).  I put two jingle bells in the middle of the batting scrap stuffing. 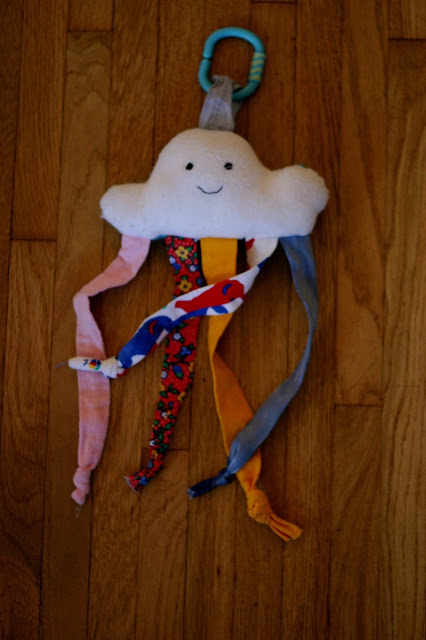 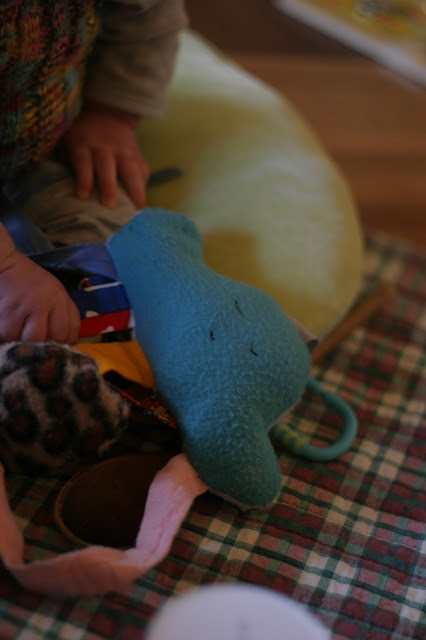 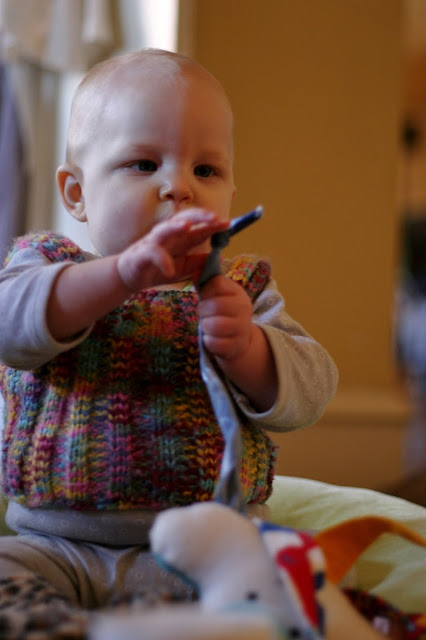 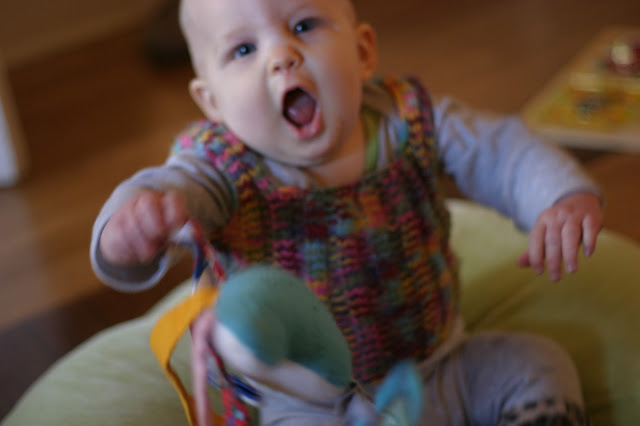 Phoebe loves these toys.  She also loves bowls, wooden spoons, combs, rags, and paper. It's kind of a game these days to find things around the house that Phoebe can explore with her fingers and mouth.
Posted by Margo at 10:41 PM 13 comments: