Phoebe's main stroller kept breaking at a joint, and my husband would fix it and shake his head warningly.  So I took that as a sign that the stroller was going to collapse on the sidewalk with a full load of market provender some sweet day. 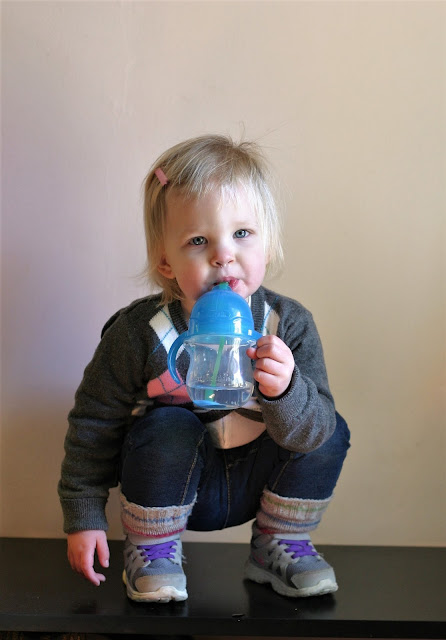 I could not bear the suspense.

So I took a lot of things to the children's consignment store and got $40 off a used stroller for a grand total of 20 bucks.  It feels a little wiggly and its basket is not as big as the old one, but I am now free from suspense. 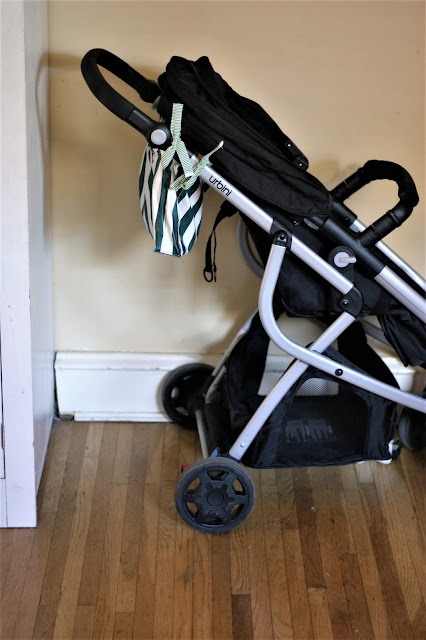 I knew I was going to need some kind of stroller organizer for the new stroller because I did not want to throw my phone, wallet, and keys down in the basket.  I decided to see if I could make something that would look nice and function well.  I'm so pleased with this stroller organizer! 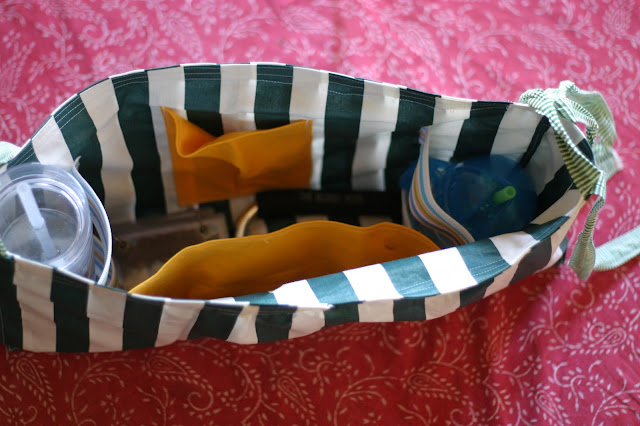 I used some scraps of Sunbrella fabric in my stash, so it's more like home dec weight with the added weatherproofing.  Each end has a gusset to make a roomy box with fabric ties at each corner.  I used some yellow scraps from this very misguided skirt as interior pockets.  And I put two bands of wide striped elastic at either end to tether water bottles.  There's also bottom space that I toss a book and a stroller hook into, as well as small purchases and doodads.  The fabric ties are very secure on the stroller handle.  I've been using it for over a week now, and I love it! 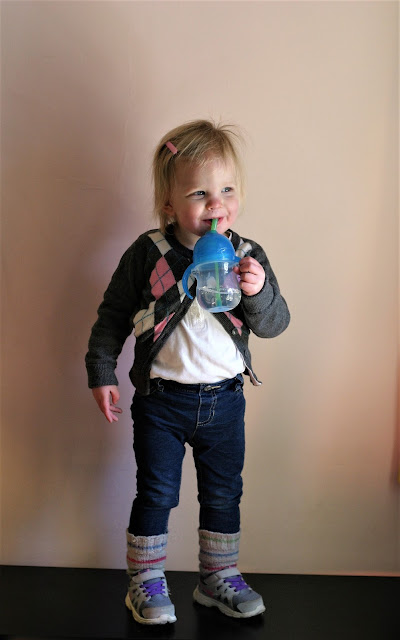 Email ThisBlogThis!Share to TwitterShare to FacebookShare to Pinterest
Labels: baby, making do, sewing

The main dish of this Sunday dinner was actually sausage, potatoes, and sauerkraut, but the provencal squash is what I really want to tell you about. 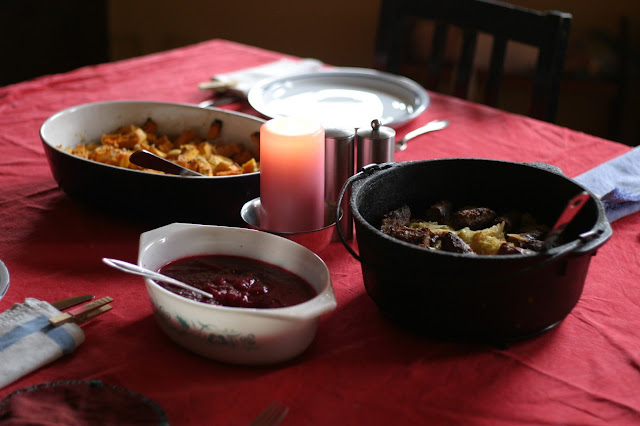 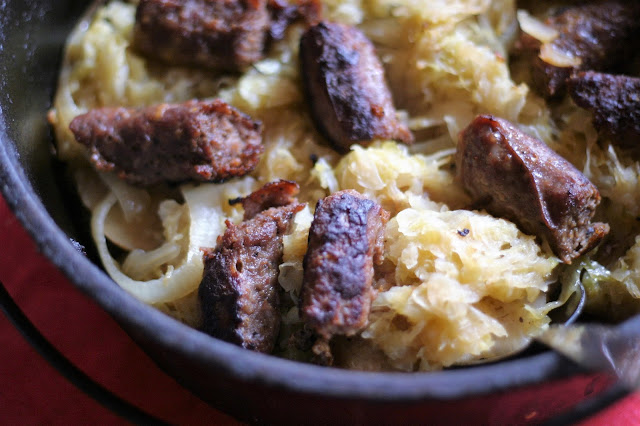 Saturday:
thaw sausage
get sauerkraut out of crock in basement and into jar in fridge
peel and cube butternut squash
make cranberry applesauce (I think that's the last bag of frozen berries I have!) 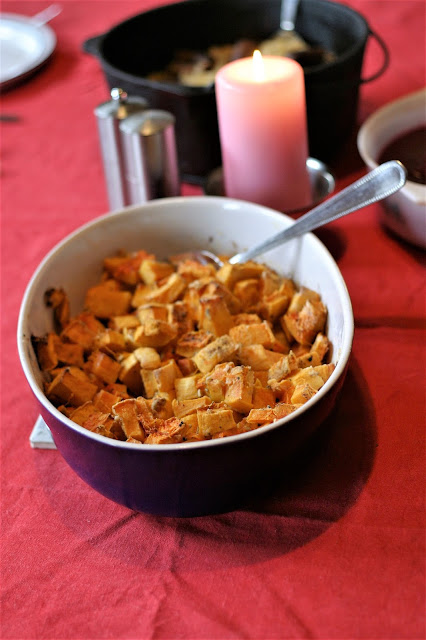 I do love a side dish vegetable that is tasty and innovative but still answers to the description of vegetable; if a "side dish" has substantial cheese or meat or breadcrumbs, I treat it as a main dish, but then I still am back to square one for a vegetable.  So here is Provencal Winter Squash Gratin from Vegetarian Cooking for Everyone.  It's not hard, but it's clever with the ingredients and so delicious.

Note:  I have not once included the parsley because I never remembered to buy it before I made this dish!  So a few times, I would sprinkle in a little dried rosemary or sage.  But I really do intend to include parsley next time I make this squash.
Posted by Margo at 3:13 PM 3 comments:

A Cozy Spot with a New Painting

This spot in our kitchen has been a process.  First there was the free table and stools from a friend's parents who were moving.  Then we installed the red light over the table; I really wish it was a translucent red, so that it would glow when the light was on.  Then I made red slipcovers for the stools to hide the boring beige.  Finally, I bought an original oil painting from Anna of Pleasantview Schoolhouse. 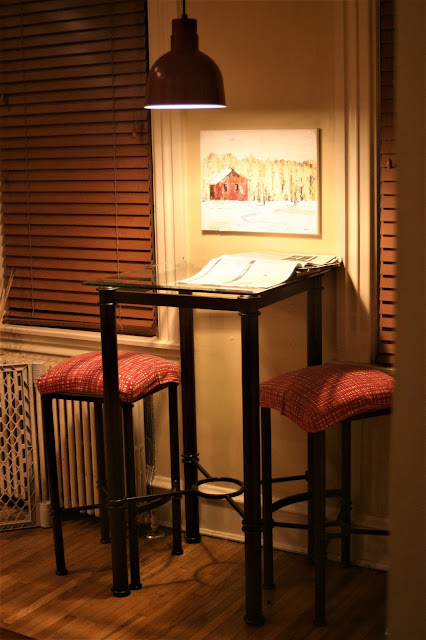 People perch there while I'm cooking, or I stop there with a cookbook and a snack. I leave the parts of the Sunday New York Times that I haven't read yet on the table, and read at them throughout the week.  I pull Phoebe's high chair out there for lunch and have a cozy tête-a'-tête with her, sitting sideways so she puts her feet on my knees.  It's a fun spot.

Email ThisBlogThis!Share to TwitterShare to FacebookShare to Pinterest
Labels: decorating

I'm really sorry that I'm posting this a week after the holiday (it's the first Saturday in February, which was February 4 this year).

Let's say it's Ice Cream season, just like Christmas season and the way the retail stores celebrate holidays!  So you can eat your ice cream tomorrow for breakfast. 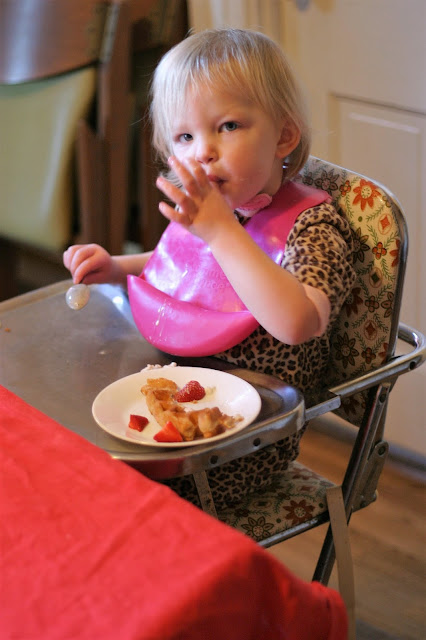 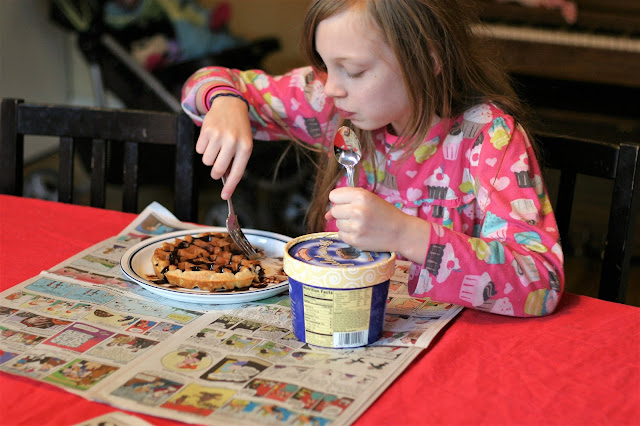 Our menu:
:::yeasted waffles (My favorite for ease, thrift, and deliciousness - recipe below)
:::hot fudge sauce (I make this in hopes that there will be leftover in the fridge so that I can sneak a spoonful at odd moments - it's ganache, essentially, and so very very very divine)
:::vanilla ice cream (from the store - not in the mood to make ice cream right now)
:::strawberries (which I bought on a whim at market after the standholder said they were delicious; no, they were not; of course they were not: this is the Northeast in February!)
:::bananas 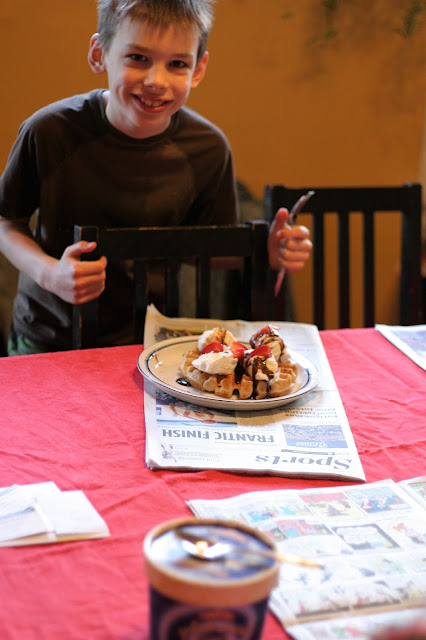 Heat together to melt the butter:
1 3/4 cups milk
1/2 cup butter
(I do this in a large glass measure in the microwave - and my measure has a lid, so that's what I use to stash the batter in the fridge overnight; very handy)

Set aside to cool to lukewarm.

Refrigerate the batter for 12-24 hours.  It will inflate. Whisk briefly to recombine when you're ready to make waffles; the batter will deflate.  Fry in waffle maker according to manufacturer's instructions.  Hold waffles in single layer in 200F oven for 10 minutes for maximum crispiness.
Posted by Margo at 4:45 PM 5 comments:

Phoebe Goes to Church in a Sober Dress

My vision for this dress was a little French girl:  a charcoal grey dress with a bright white Peter Pan collar, worn with black tights and black patent shoes.  In reality, Phoebe looks like a sober little pilgrim, still a darn cute look for a toddler. 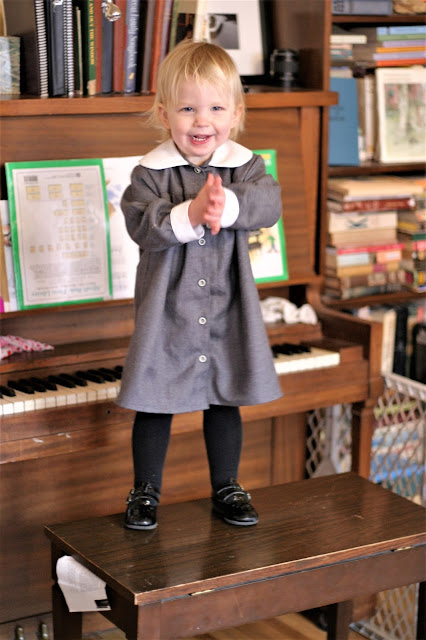 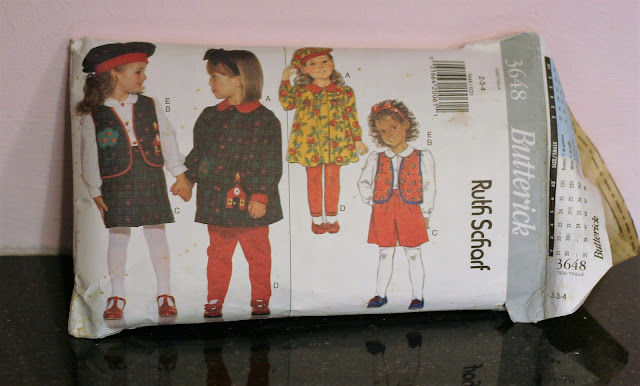 But I could also call this dress the Goldilocks dress because I had to try three times before I got it right.  First, when I followed the pattern, the enormous 80s puff sleeves were wearing Phoebe.  Then, I recut the sleeves with a sleeve from another pattern and they turned out to be too small for the arm scye of the dress, but I tucked them in there anyway because it was the night before Phoebe's dedication at church. 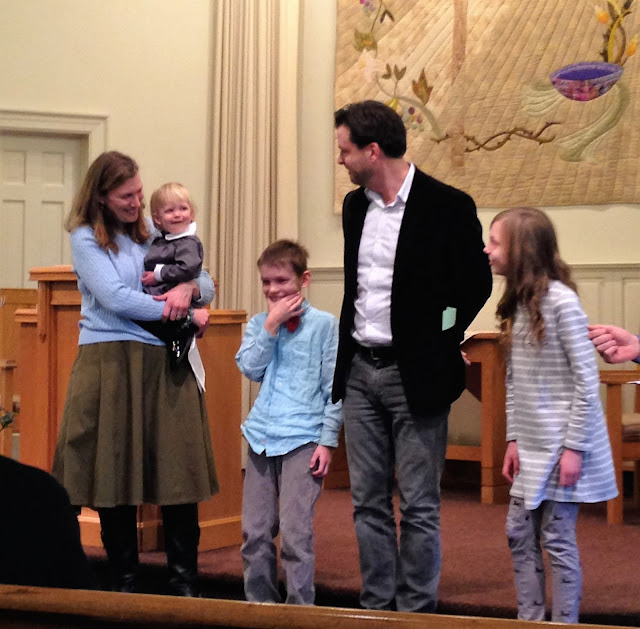 She wore the dress to her dedication and it was all bunchy across the shoulders, which no one noticed because Phoebe herself was charming.

We came home after the service with our extended families in tow and had brunch instead of Sunday school.  My husband came up with the idea, and I worked on the menu to make as much ahead as possible. 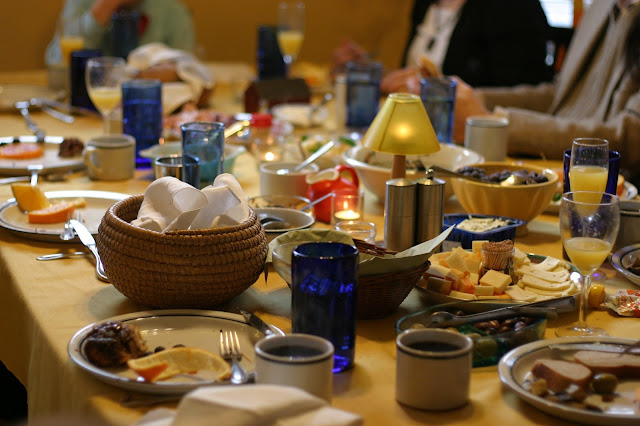 Everything was so delicious and leisurely that several people begged to have brunch together every Sunday. 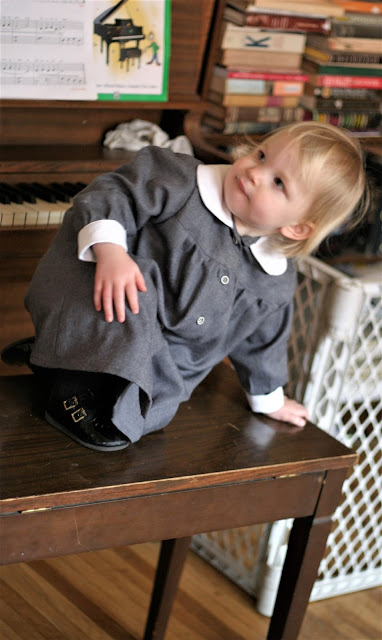 I had decided to salvage the adorable striped buttons off the dress and junk it, but really, Phoebe did look so cute in it, that I found the very last scrap of grey fabric and redid those sleeves a third time.  And finally, finally, I got them reasonably right (still a tad long across the shoulders and through the wrist, but at this point, Phoebe had started shrieking "no!" when the dress crossed her line of sight because I had tried it on her so many times). 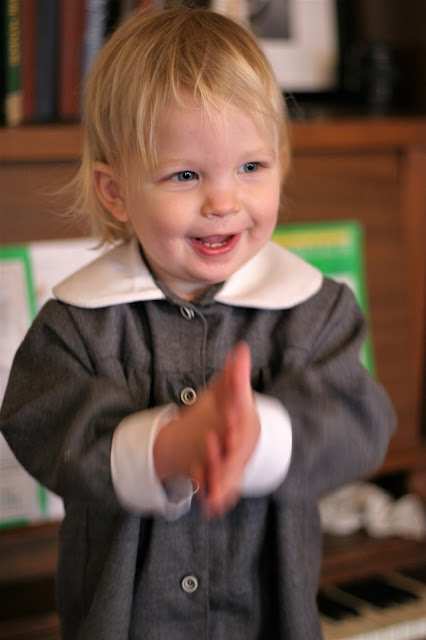 I'm really grateful to have pictures to show some snippets of the good times we had.  Thanks to my sister for snapping some phone photos during the service itself; I hear my sister-in-law also got a short video of Phoebe saying "amen" to the congregation, too, and laughing and clapping at them when they started laughing and clapping at her. Oh, Phoebe!
Posted by Margo at 3:51 PM 13 comments:

I got this recipe from a Lebanese man at market, who has been in the US for more than 30 years and is not a chef by training.  But his food is delicious and these meatballs are an easy way to make Middle Eastern food at home. 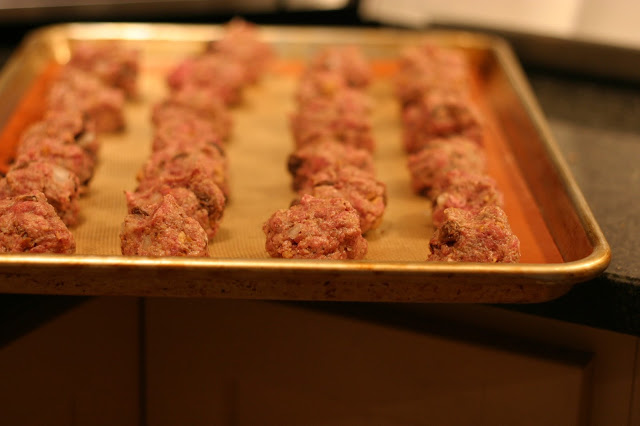 Typically I serve these meatballs with quinoa or couscous, flavored simply with olive oil, parsley and garlic, plus some wilted spinach. 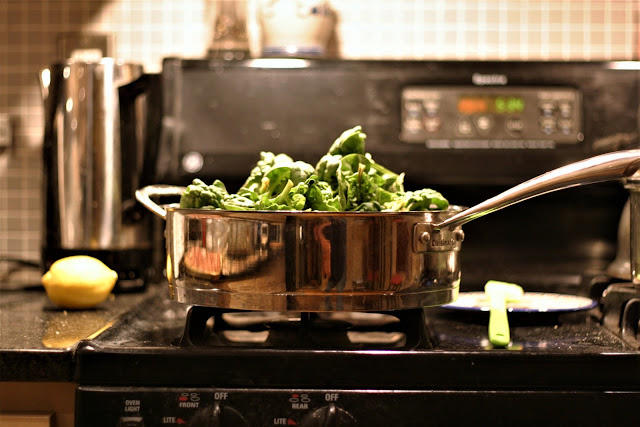 I love Middle Eastern food, but it makes me sad these days in the midst of all the fear and dissension about refugees.  Our church is currently helping to re-settle a Syrian family; Ben was at their place last week ostensibly to play soccer with their boys, but all he could talk about when he came home was Randa's food.  He asked me to get her recipes, bless his heart.

Food is my favorite cultural sharing, so I hope to eat Randa's food, too, and communicate my love in whatever way I can. 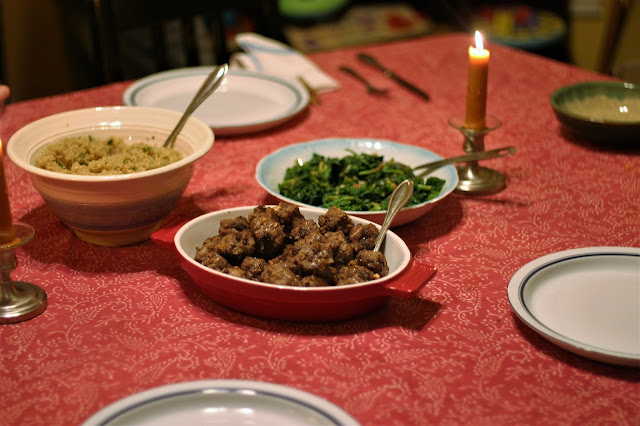 Mix gently and thoroughly.  Form into 1" meatballs and space out on baking sheet (I line mine with a Silpat). Bake at 350F for 15-25 minutes, depending on how big your 1" meatballs really are. Serve hot over rice or cous cous.
Posted by Margo at 11:47 AM 6 comments: