The Week in Suppers: end of April, pandemic-style

Tuesday: Pierogies sauteed with radish tops + garlic, German red cabbage, sourdough crackers with cream cheese + pepper jam
Notes: I do not boil frozen commercial pierogies anymore.  Just thaw them for an hour or few at room temperature, then saute until they get some nicely browned edges and are hot through.  I like to saute them with onions and apples, but here I had some radish tops and was short on onions.  So I improvised! 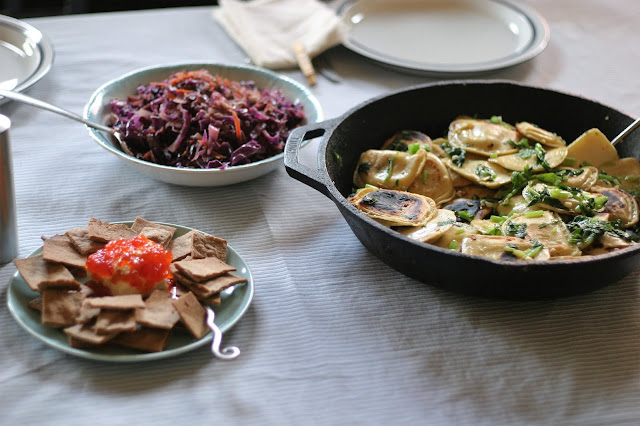 Wednesday: polenta & eggs from Smitten Kitchen Everyday, French bread + olive oil, sauteed kale with garlic & lime, black bean brownies + the last little bit of mint choc chip ice cream
Notes: It took almost 30 minutes to bake the eggs when the recipe implied it would take only a few minutes. No evening commitments tonight, so it didn't matter.  Flavor was worth it, though!
Also, if you chop the kale stems very thinly and put them in the hot pan for 5-10 minutes by themselves with the lid on, they will be tender enough to eat with the sauteed leaves.  It's a small thing I do to cut down on food waste. 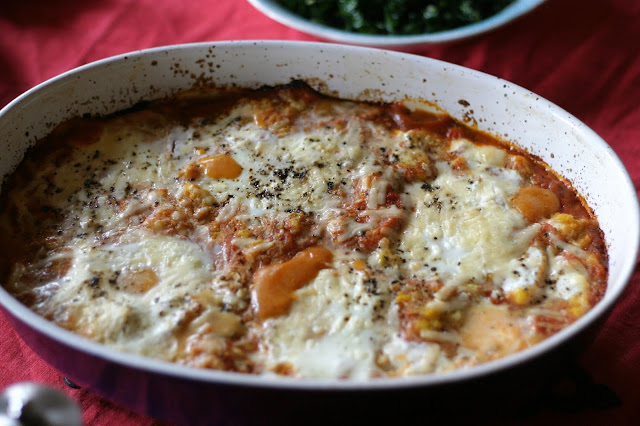 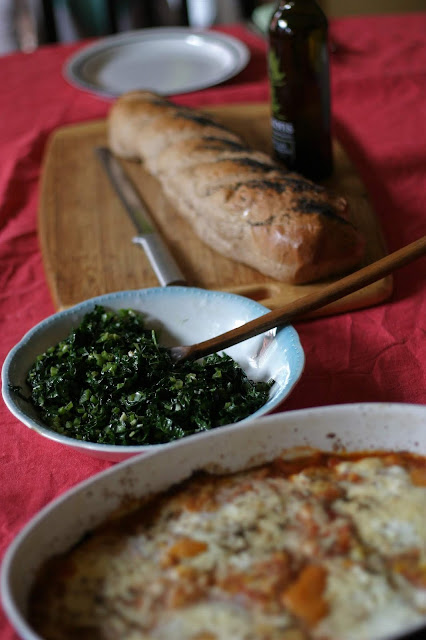 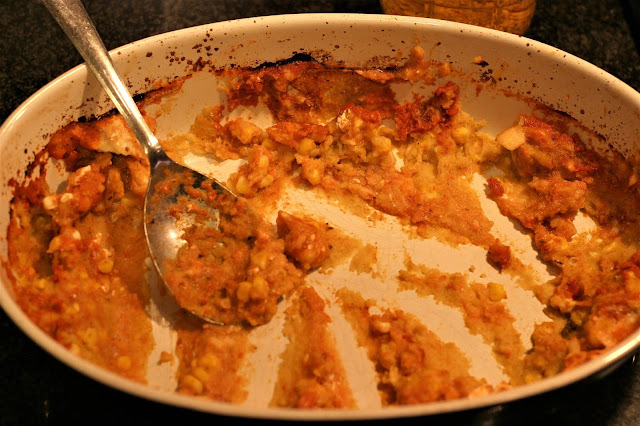 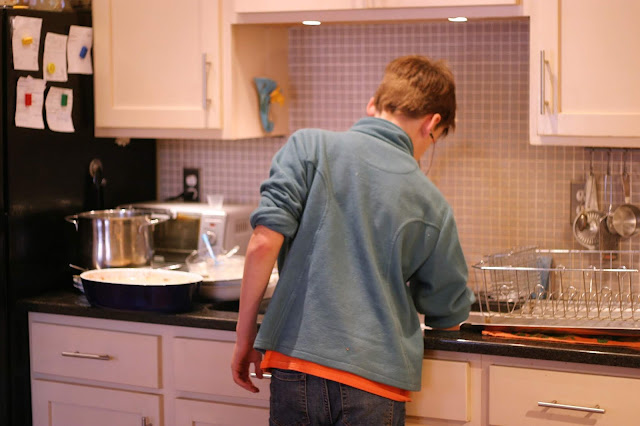 Thursday: chicken tikka masala in the slow cooker from Stock the Crock with swiss chard as well; turmeric brown rice; nigella seed naan; pear chutney; pickled lemons
Notes: If I'm making a saucy stew with a flavorful sauce, I usually bulk it up with vegetables to capture the sauce.
Also, I mixed the nigella seed directly into the naan dough this time because it kept falling off when I sprinkled it on top in previous batches.  Success!
I'm working on using my little jars of canned goodness.  Hence the spiced grape butter on Monday, pepper jam on Tuesday, and chutney here. 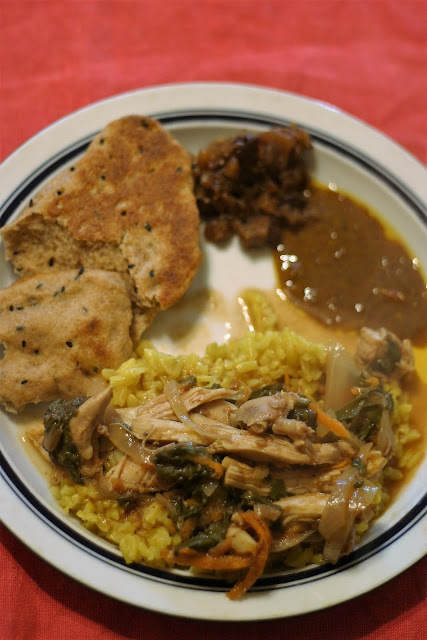 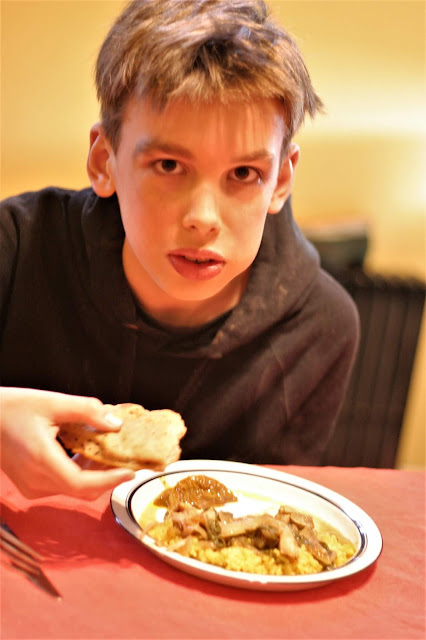 Friday: pepperoni/onion pizza, fancy mushroom pizza with white sauce and truffle oil, radish top and green olive pizza; chips!!! frozen peaches
Notes: The fancy mushrooms are from a local farm who normally sells to restaurants. My husband gave me truffle oil and truffle salt for Christmas - I am totally hooked. I tried to recreate a mushroom pizza from a local restaurant I love and I'm very pleased with my version - except that I forgot to put salt in the dough when I mixed it up which shows the state of my brain these days. 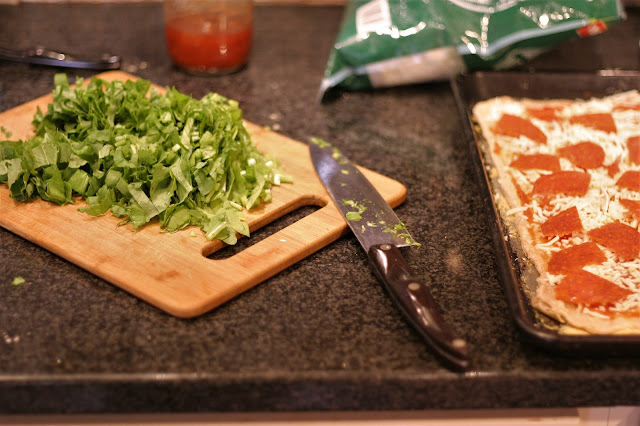 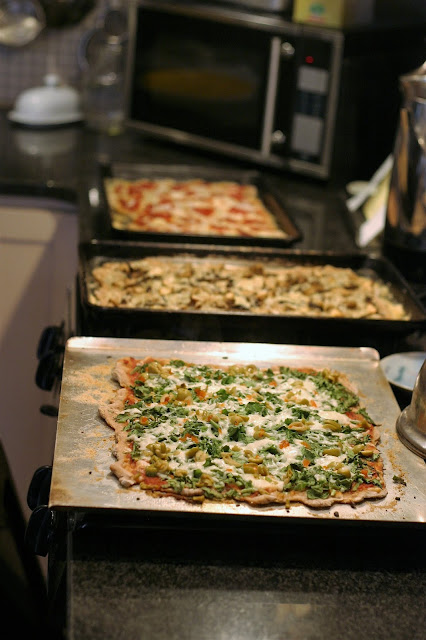 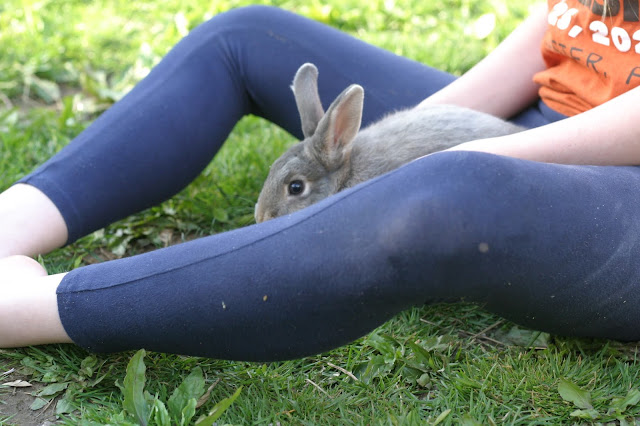 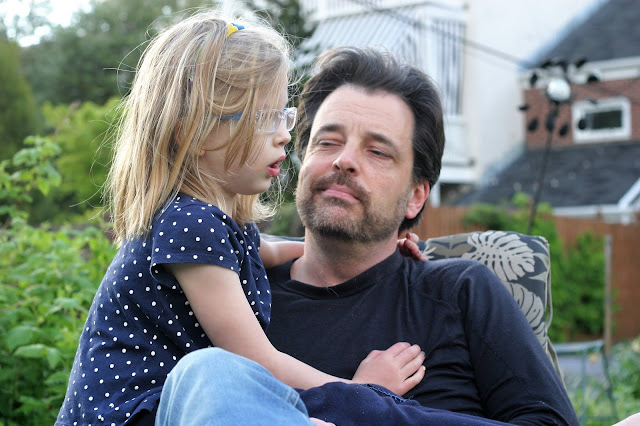 Saturday: take-out Chinese!
Notes: We rarely buy take-out or go to restaurants as a family, but we wanted to support our favorite local Chinese place. It was a total treat - a break from the heavy-duty cooking I do and so delicious. 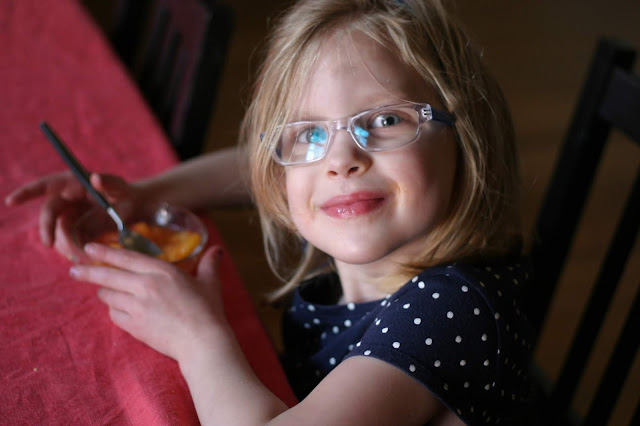 Lemony Mashed Potatoes
I got the recipe from Jennifer, who got it from Melissa Clark.  I don't really consider it a salad, and this is how I make it.

Boil until very tender:
2 1/2 -3 lbs. chopped potatoes with skin on

Drain potatoes. Gently pour hot potatoes on mixture and mash with a potato masher until thoroughly mixed.  Serve immediately while hot or let sit and serve at room temperature.