Bright Things I Made

I recently spent hours uploading 2018's photos to Shutterfly, partly to make a surprise project for someone who is probably reading this blog post.  So that's a secret.  But it's so trippy to zip through a year in photos - the events I've forgotten, the details, my children who used to be small, the things I've made.

So here are some things I made that I fully intended to blog, to put on The Record.  Bonus:  they are bright! Perfect for winter when we must make our colors while the natural world sleeps in grey, white, and brown.

I made a new batch of handtowels and aprons (Simplicity 1221) for a shop that promotes young Mennonite makers (I am still young, see).

I am particularly proud of that little zing of yellow rick rack with the calico and gingham. 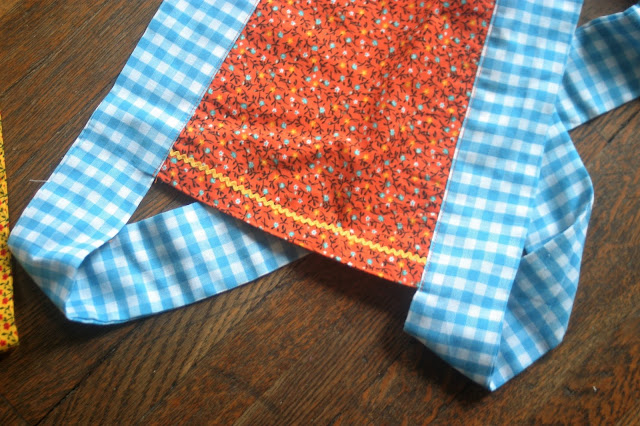 Also, I love yellow and pink together, particularly these strong shades.  I didn't have enough for the belt, so I pieced together the feedsack calico. 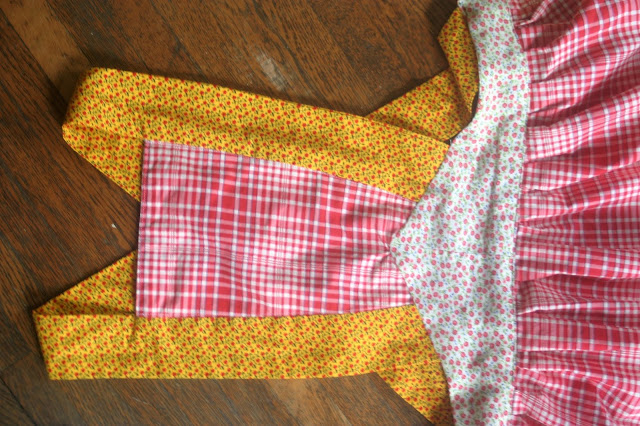 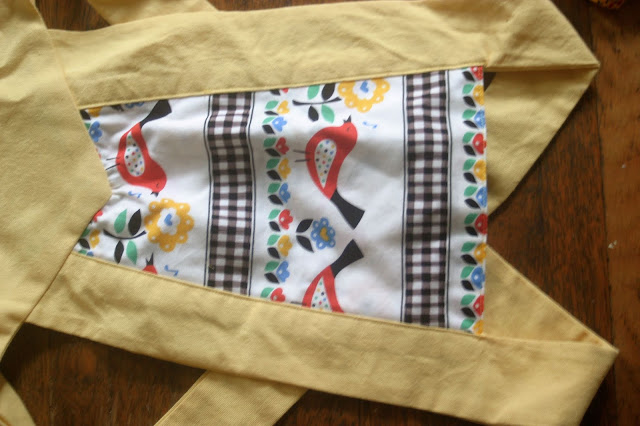 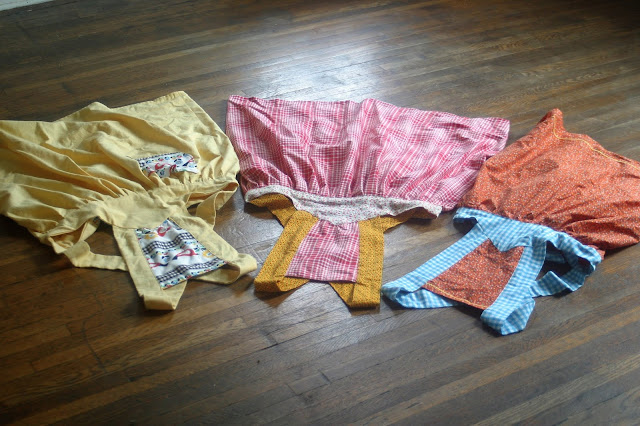 I love mixing fabric so much that I like to piece even the toppers for handtowels. Also, I have not forgotten that I owe my readers a handtowel tutorial. 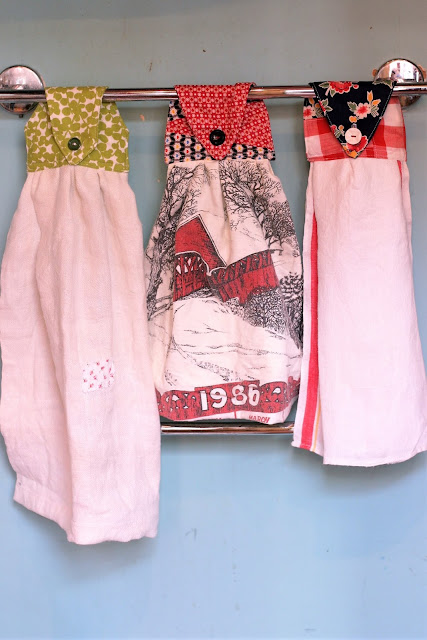 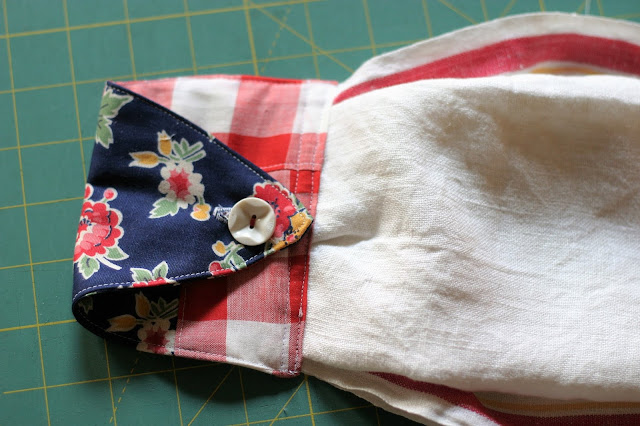 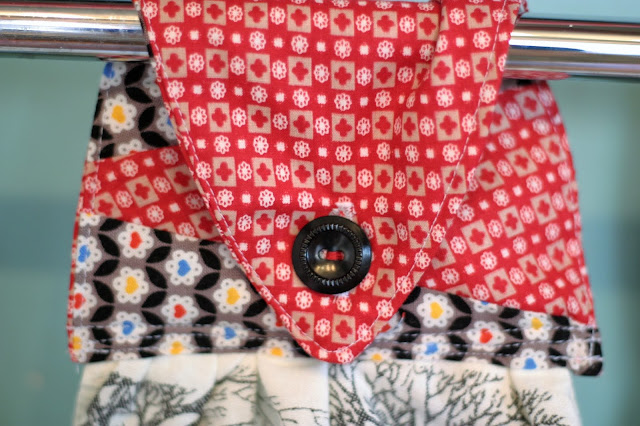 Also, I made a beautiful cake for Christmas day; well, it's presented as two rectangular cakes.  It's the petit fours cake from Smitten Kitchen Every Day: Triumphant Unfussy Favorites.

There was some difficulty and swearing involved as is normal for fancy cakes, but oh my word, this cake was beautiful in every respect.  Those are almond paste holly leaves and berries that I colored and formed with my own stained fingers.  On top of ganache, which covers a triple layer of delicious almond cake sandwiched with raspberry jam. So, so delicious. 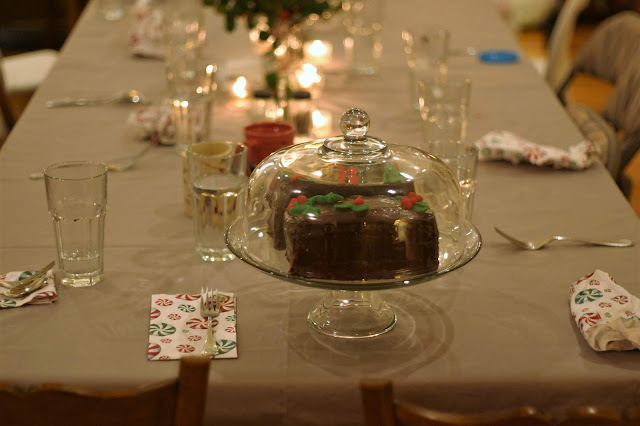 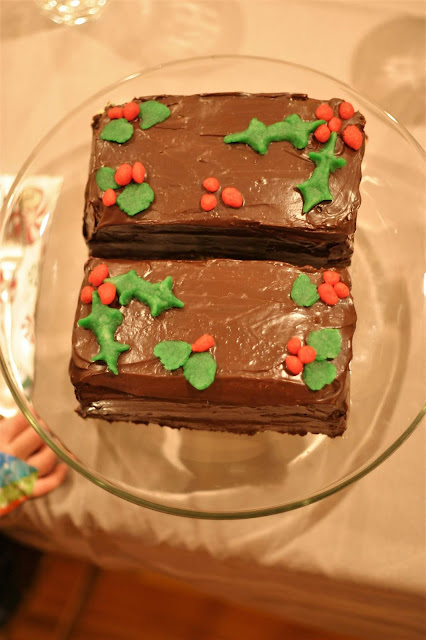 Hope your winter day has some brightness in it!  Around here, it's terribly cold and I just found out that school is canceled.  This is frustrating to a person like me who makes it a priority to get proper clothing for my family so they can get fresh air in any weather. I'm sure I'll be sending them out to sled!
Posted by Margo at 7:18 AM 6 comments:

Kitchen Spot for the Canned Goods

Part of the pleasure of canning for me is seeing the actual filled jars, so pretty in all their hues.  My husband hung a small shelf in the kitchen so I could see the jars and also so I didn't have to run to the basement every time I needed one. 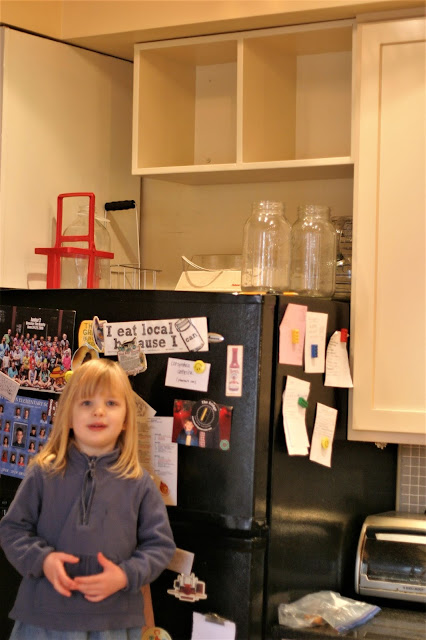 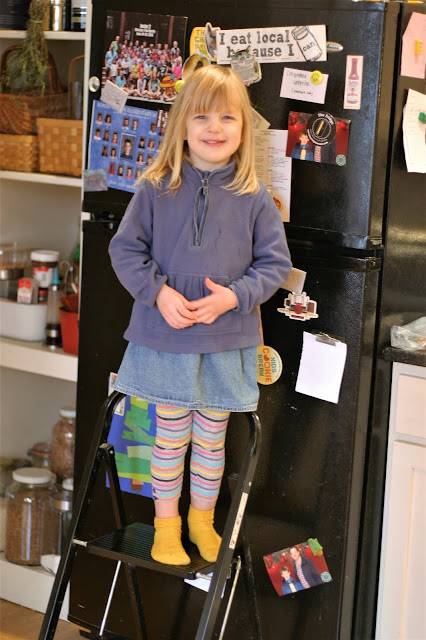 To get to my basement canning storage, I have to go to the back door, put on my outside shoes, walk through the weather to the big heavy cellar door, and go down the steps to the basement. I go down there multiple times a day, actually.  The freezers are down there, the empty jars, so many things. 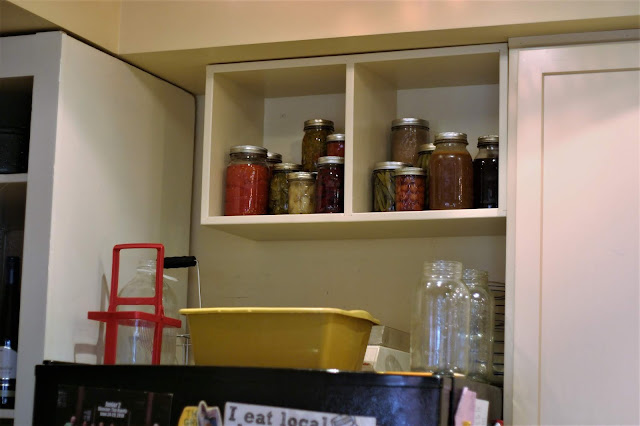 I'm just really thrilled to have this sample collection of canned goods right here in my kitchen.  The other night when I remembered there were some Christmas gingerbread cookies in the freezer yet, I plucked a quart of applesauce off the shelf to go with them.  Easy peasy.  No outside shoes required.
Posted by Margo at 10:10 PM 6 comments:

Now the local produce is dwindling from the root cellars.  I'm not that interested in shipped produce, especially imported with its high carbon footprint.  So I'm still buying roots and sometimes even finding new, delicious ways to prepare them.

Here is beet sauce, from The New Moosewood Cookbook by Mollie Katzen.  I have actually blogged about it before, but I'll give you a clearer recipe and some more ideas.  Because it is absolutely delicious - the best idea of Harvard beets without the syrupy over-sweetness. 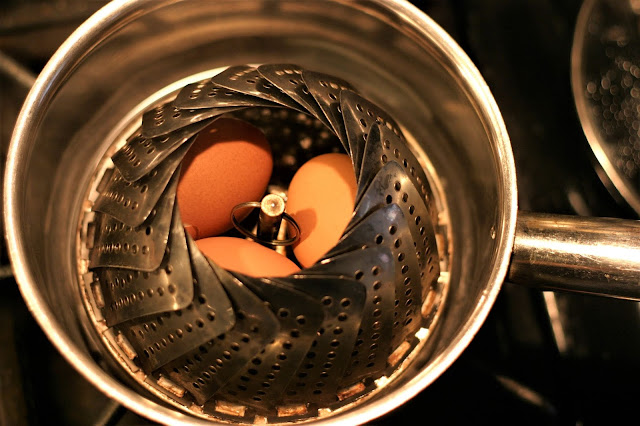 I bought a quart of beets recently at market.  I put them all in a covered casserole and baked them until they were soft, then rubbed off their skins in cool water while they were hot. You can do this in a slow cooker, too. 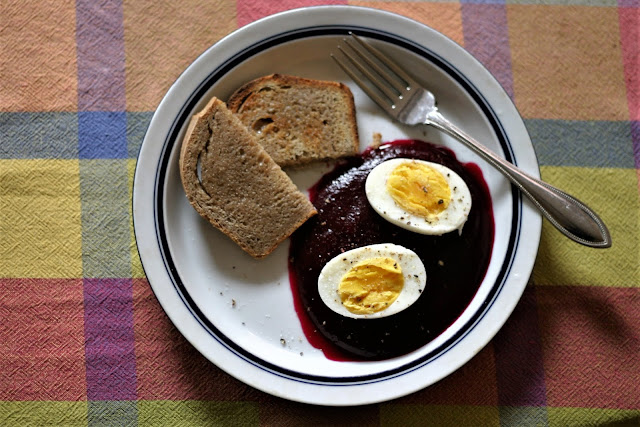 Two of the beets went into the sauce.  Then I also took two beets and two wrinkly apples and chopped them up, adding a little mayo and some toasted walnuts:  beet and apple salad from the More With Less.  Perfect next to shepherd's pie and broccoli.

The remaining beets will probably be used as vegetables in a green salad, although it's easy to dress cooked beets with a vinaigrette, sprinkle with feta or blue cheese, maybe some walnuts, and serve on a bed of greens. 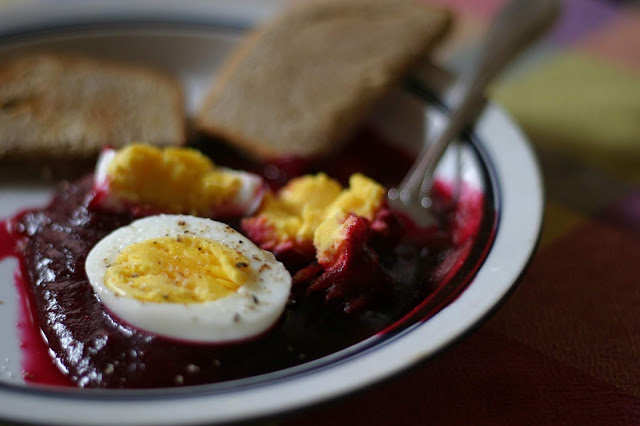 Puree.  Taste.  Add a little something if needed (I can assure you, I am not getting out teaspoons and tablespoons for this! I am using glugs and dollops). Katzen also recommends minced fresh mint or tarragon, which I have never bothered with.

Serve this sauce room temperature with hardboiled eggs, macaroni and cheese, semolina gnocchi, or something potato-y.  Even avocado toast. . .

Turmeric Benches in the Prayer Room

I was asked to make the prayer room function better at our church.  I would call it an anteroom, in the style of old Mennonite meetinghouses:  a little room back of the pulpit used for various small purposes.

In this case, it's the site of the pre-service meeting, as well as part of the library and some service supplies like candles and baskets and drums. See? Various small purposes. It was cluttered with chairs and an overhead projector, as well as some things on the shelves that no one noticed because, as is the way of many spaces, everyone assumed someone else was the homemaker or caretaker. Unfortunately, I don't have a "before" photo. 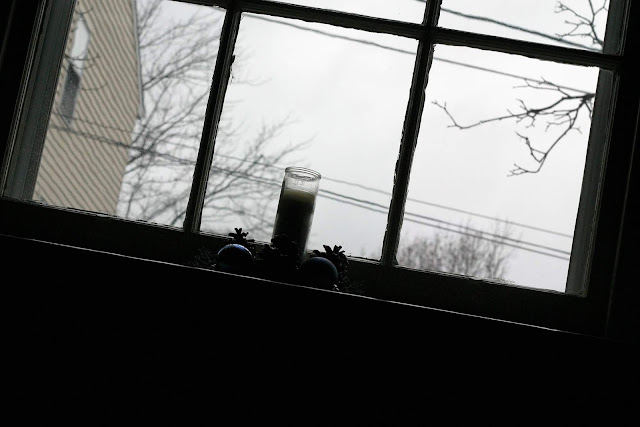 To open up the space and allow for maximum flexible seating, I took out the clutter of chairs and put in three backless benches.  I made some cushions for people that objected to hard benches. I straightened the shelves and re-homed some lost items. 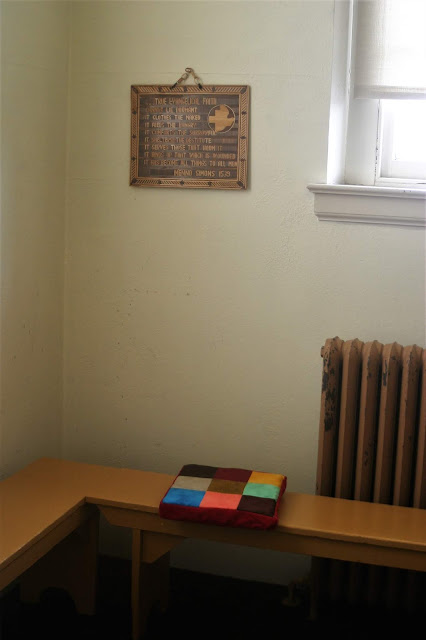 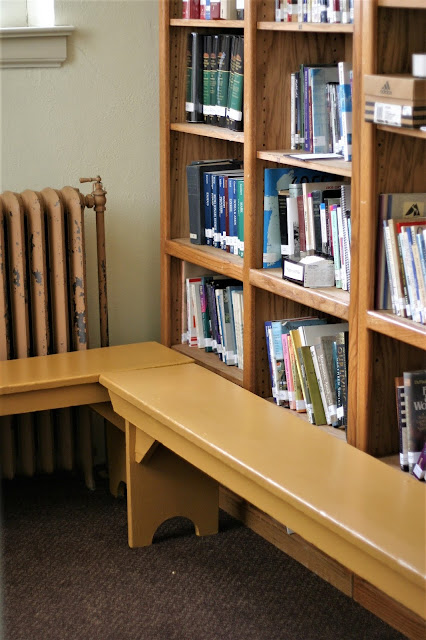 All of this cost about $70 in materials when (I think I recall) my budget was $300.  The benches were in a fascinating graveyard of church history up on a third floor. A fellow property commission member resized the one bench for me.  I spread out a dropcloth in a Sunday school room and painted the benches (with trepidation for the carpet) over a week in Benjamin Moore's turmeric. I had to do it Monday to Saturday - luckily we live close to our church and luckily Phoebe could amuse herself by climbing over and under pews.

At first, the yellow looked dreadfully brassy and brazen and I had to force myself to finish.  But when the benches were dry and placed in the prayer room, I was so relieved to see them warm and brighten the space, just like my vision. 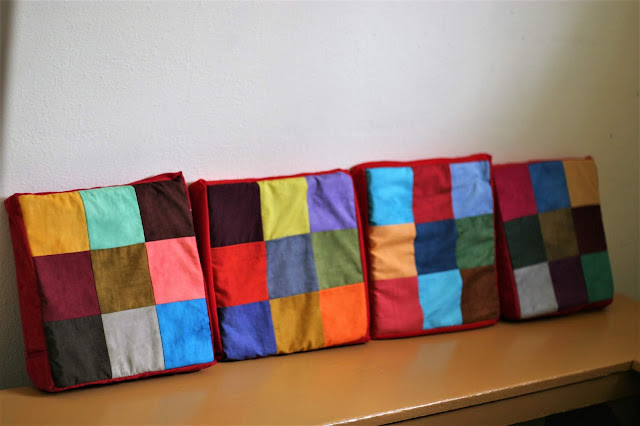 For the cushion covers, I used pre-cut patches that were given to me a few years ago and backed them with red corduroy left from Phoebe's dress. The colors play together in such interesting ways - a little Amish here, a little somber there, a little clashing over there. A little brightness wherever a cushion roves in the room. 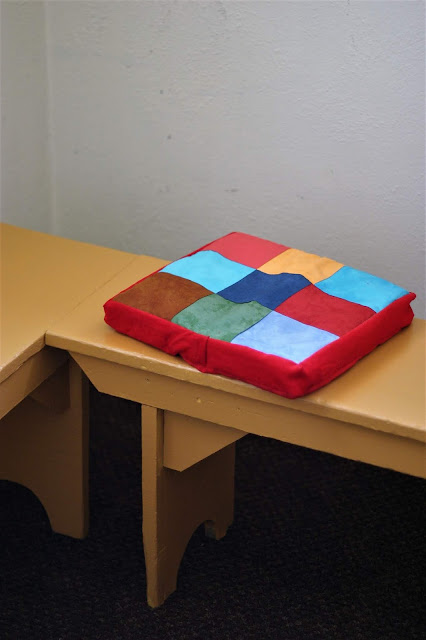 I also hung a wooden plaque in the prayer room with a quote by Menno Simons: "True evangelical faith cannot lile dormant. It clothes the naked, feeds the hungry, comforts the sorrowful, shelters the destitute, serves those that harm it, binds up that which is wounded; it has become all things to all people." 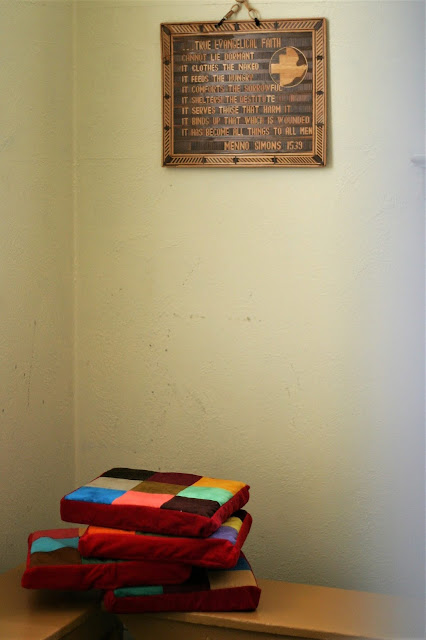 And we're all very happy with our little prayer room in its freshness.
Posted by Margo at 2:04 PM 11 comments: