Phoebe was sick on her birthday and after her birthday party was rescheduled twice, we finally celebrated with grandparents.  I had baked her cake in early May and stashed it in the freezer, so finally I could pull it out and finish it up. 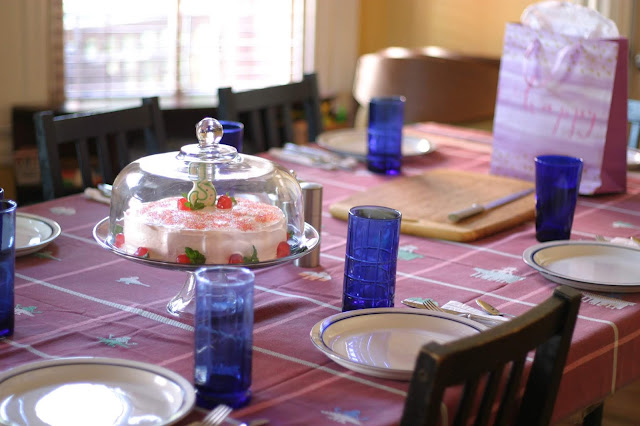 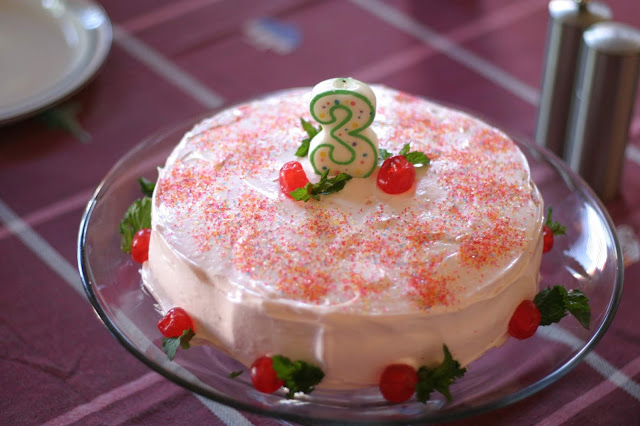 It's a wacky cake (chocolate) flavored with bergamot.  So when the recipe called for hot water, I used very strong decaf Earl Grey tea!  I got the idea from my friend Jess.

Then I iced it with Italian meringue tinted pink, and served sour cherries on the side; I got the idea for the cherries from Moosewood - Mollie Katzen calls them Danish cherries, but most of us would call them cherry pie filling.  I decorated the cake with mint leaves and candied cherries (I have them to use in Grandma's Christmas bread), and I do think the effect was more Christmassy than I intended.

I used my frozen sour cherries that the girls and I picked at an orchard last year.  The whole combination was so delicious.  I've been on a kick this year to use fruit in interesting ways for desserts.  Typically, I think I would have served ice cream with this cake.  No one missed it here. 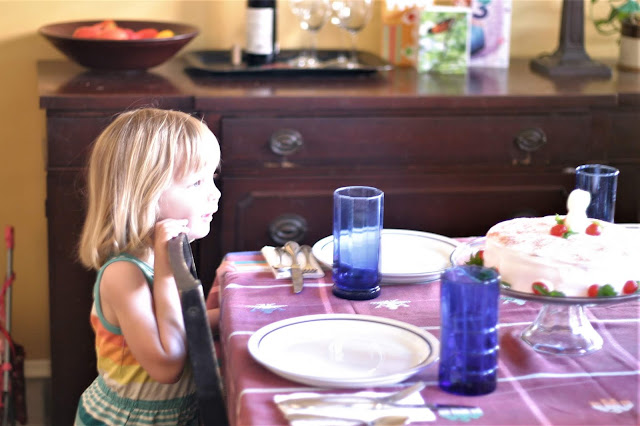 Phoebe loved her cake, loved her party, was just a total birthday champ from beginning to end. She was fascinated by "the number on my cake." She actually tried to eat it in the happy chaos after she blew it out and I was cutting the cake. And now one of her conversation starters is "the number on my cake" and "it's wax, and we don't eat wax." 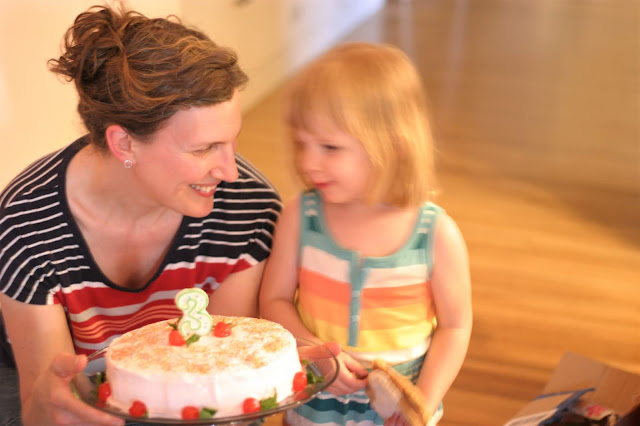 I'm glad we waited until she could fully participate and appreciate her birthday. She's a kid now, not my baby - I have such mixed feelings about this passage of time. 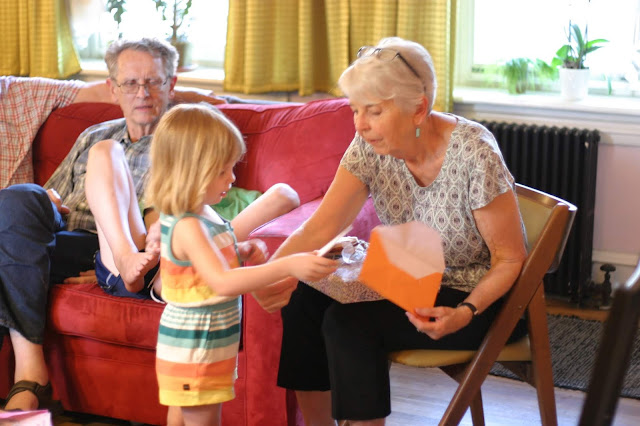 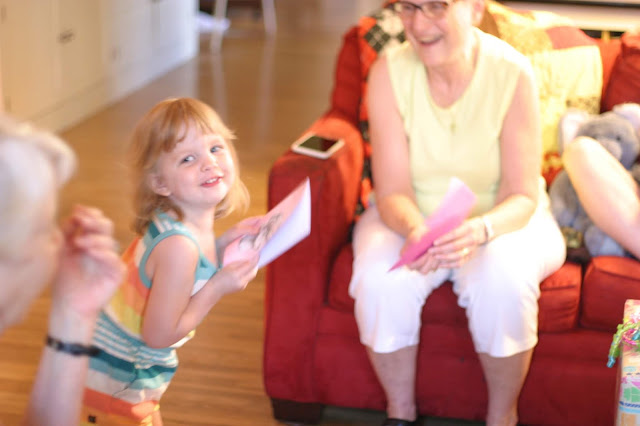 Continuing the theme to dress Phoebe for the summer from my stash. . . I limited myself to my piece bag for this one.  It was fun! I thought at first I would do sherbet colors, but somehow, I was irresistibly drawn to Amish colors.  I call this Phoebe's Amish sundress, which is a hoot because they would never mix colors like this, wear sleeves or flounces like this; no part of this is Amish except my imagination. 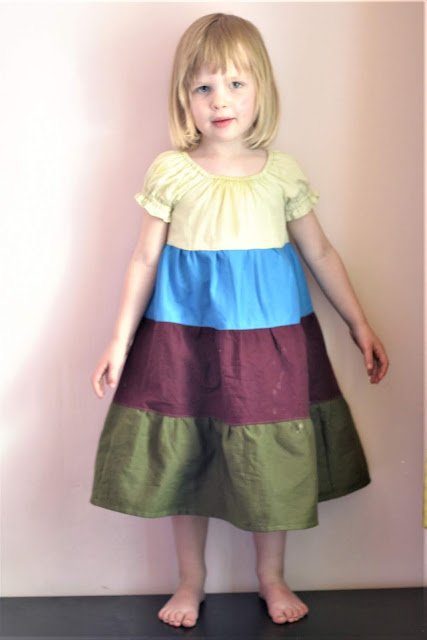 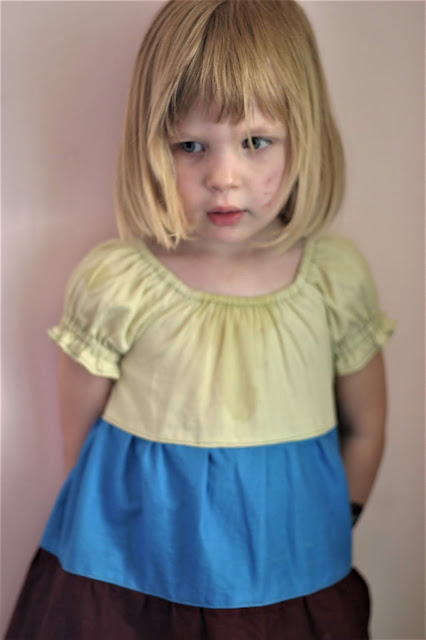 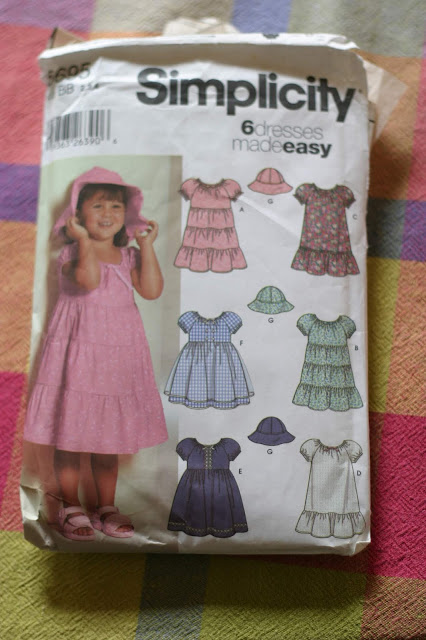 Phoebe likes this dress because she can put it on so easily and it just floats around her (privately, I think the dress looks like it's wearing her, but since she's just a little kid playing, we'll let it pass).

As you can see from the photos, the dress is seeing some serious play time. This is Phoebe's new little sandbox that her daddy made her for her birthday.  She turned three while she was sick, and we had to postpone her birthday party twice, but we gave her the sandbox on her birthday.  And it brought a smile to her sick little face and she dabbled in it.  Tomorrow, finally, is the birthday party! 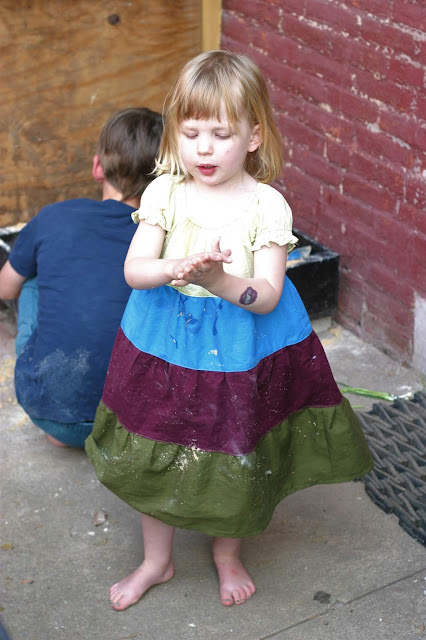 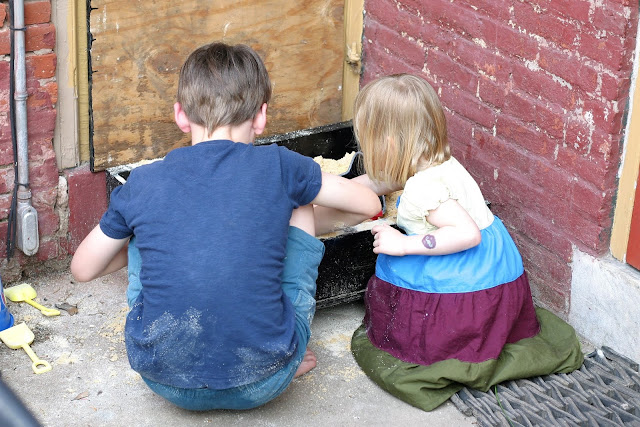 Back in March I Had a Birthday

I even had a celebration of my birthday!  My husband and I went to the new Trinidadian restaurant in town.  I also asked for, and got, a shelf for my cookbooks.  Thank you, dear husband! 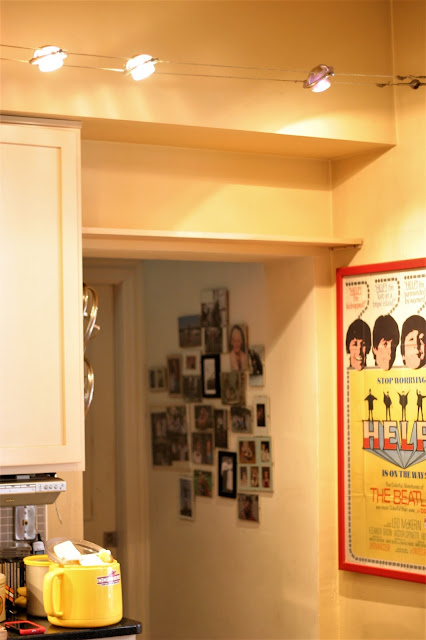 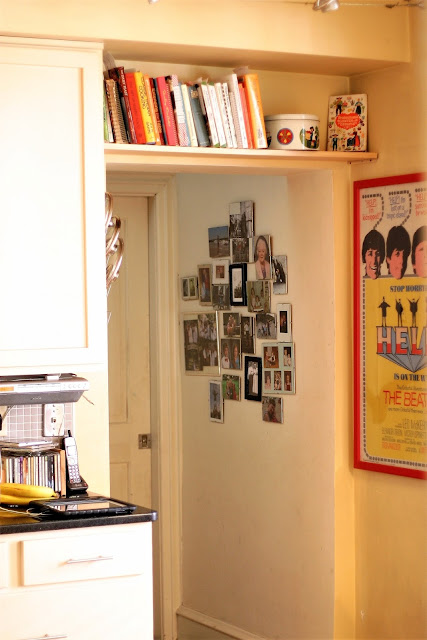 They had been crammed in a nook above my cupboards (and some of the really tall ones are still there), but now they are easy to see and grab (if you're tall). I also see that I could add some more cookbooks to my deliberately slim collection.  I'm considering Six Seasons by Joshua McFadden or Smitten Kitchen Everyday by Deb Perelman. For now, a cookie tin and funky cookbook are holding the space. Feel free to recommend a cookbook you're loving. 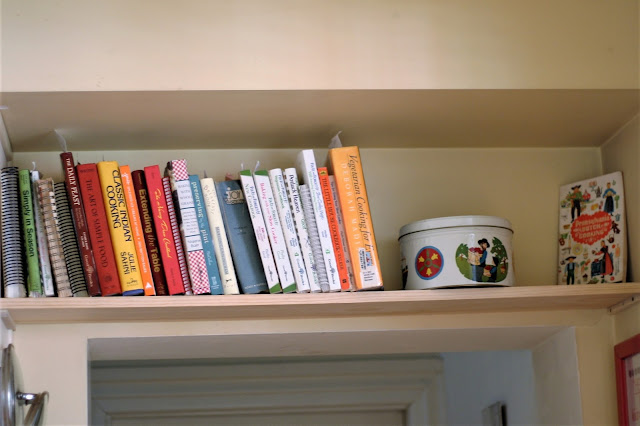 I also had some time to play at my sewing machine on my birthday - that was fun.  You know how some purses these days have tassels hanging off them?  I wondered if I could make a little patchwork dangler for my purse.  I like it, although I think maybe I put too many textures on it, but oh, it was fun to take a break from pressing duties and just play. 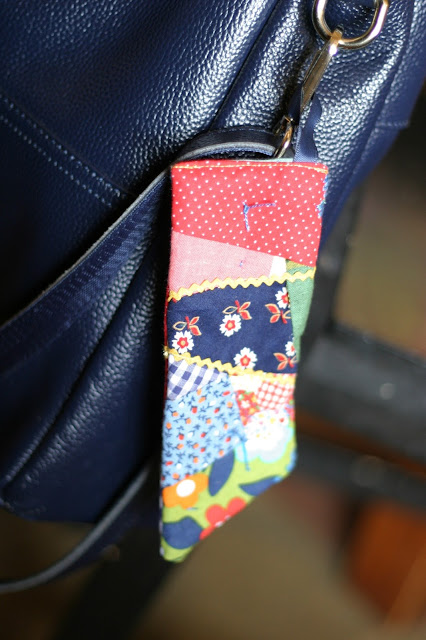 Phoebe, Working in Her Anchor Shirt

Well, wow.  I did not mean to stop blogging 3 weeks ago.  I really did not.  It's just that someone always needs something around here and what I need takes a back seat.  Well, I need to blog.  I've got so much to tell you and show you! 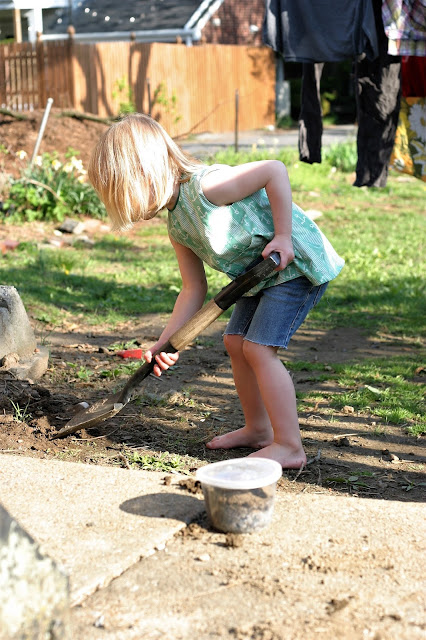 Let's start with some happy photos of Phoebe in a new little shirt I made her from fabric from Laura's boxes.  It was not quite wide enough for this little shirt - I had to piece the sides.  I also used some piping from Laura's boxes on the neck and pocket and finished the hem with bias tape, although Phoebe was much too busy to stop and let me show you. 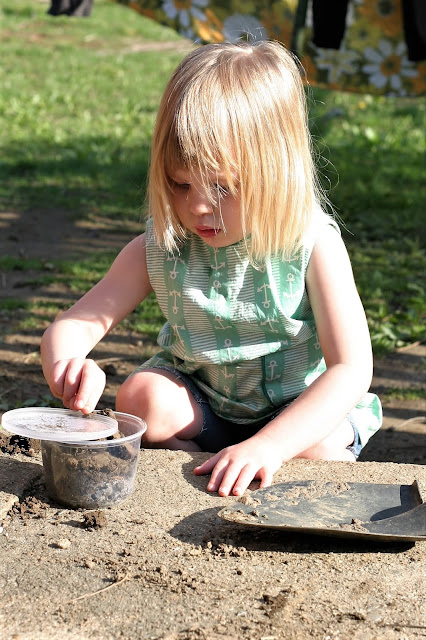 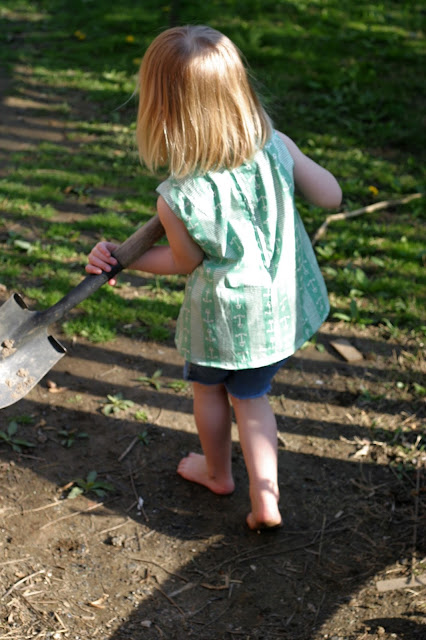 I'm very pleased with this simple shirt.  Phoebe needs some summer clothes because my source of hand-me-downs up and moved to Canada (hi Mary Anne!).  I could buy clothes at the store, I know, but it's infinitely more fun to root through my fabric and patterns and sew for my little girl, especially since my big girl might be moving on from mom-made clothes. 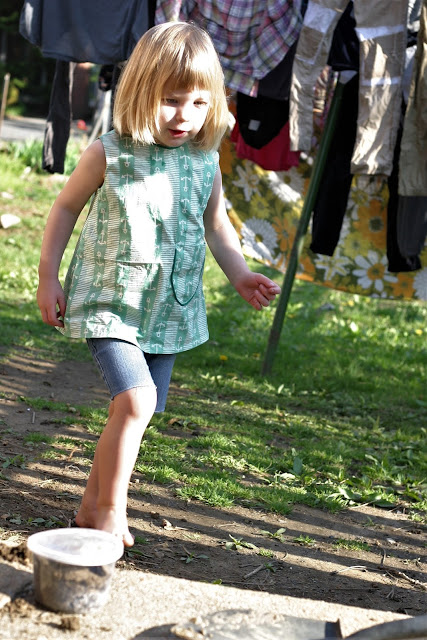 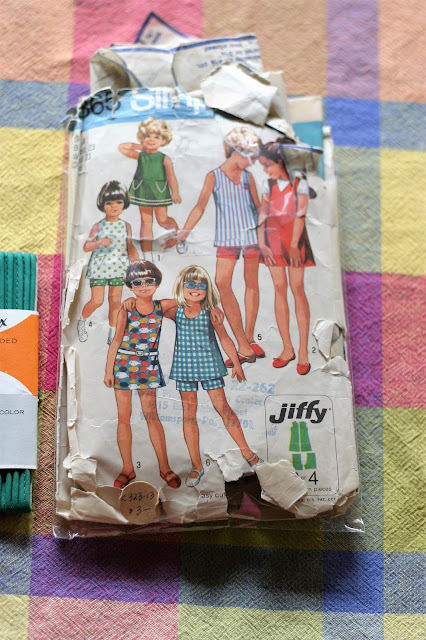 Phoebe, by the way, was felled by a very nasty stomach flu after these photos were taken.  She's still not back to normal, although I think we're getting there (and let's pause and reflect on how much of my time went to that whole process - I say that by way of explanation for blog silence, not bitterness).

It's sobering to see my sunny little bird lying in bed all day with a white face. So I'm really enjoying these photos of her working hard in her little anchor shirt. 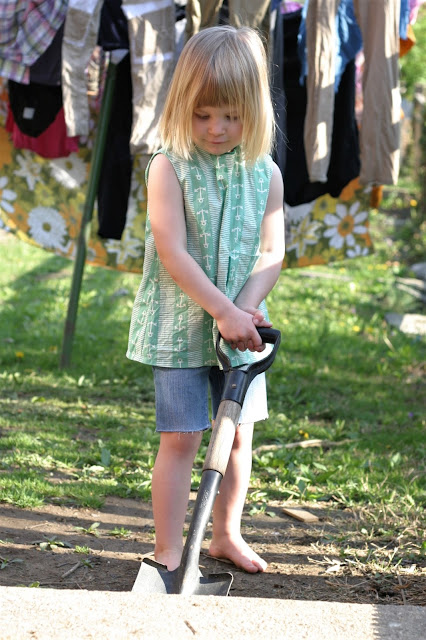