My sister told me how she and the other bridesmaids at a wedding recently sat around and constructed cake pops for the reception.  She said, "it's so easy, Margo!  You just add some icing stuff to the cake crumbs and squish it together into balls!" 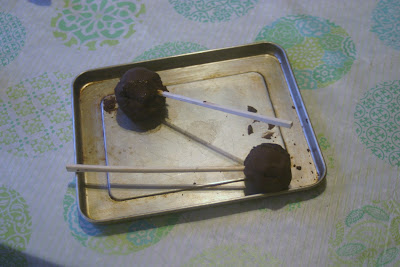 Of course I've seen the cake pops trend (I'm on Pinterest, hello), but I sniffed and assumed it was fancy-pants baking and I'm over here in the wham-bam family desserts.

I had carried part of a Wacky Cake in a bag in a tote bag and it had gotten smushed (duh).  So I checked a few recipes and got to work, making leftover, going-stale cake into cake pops. 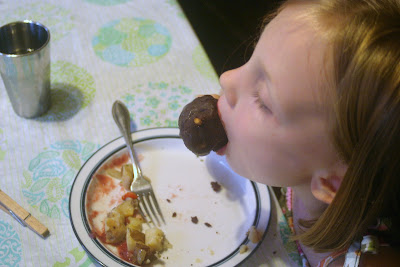 My mistakes:
1.  I thought I didn't need to add icing stuff to the cake.  I thought it was moist enough to stick into balls on its own.
2.  I didn't freeze the mixture before making it into balls.
3.  I winged a ganache for the coating and didn't really make enough. 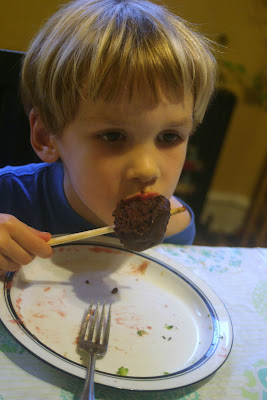 But, I used chopsticks for the sticks, and added some cayenne and cinnamon to the ganache to give a nice flavor contrast with the cake.  Then I froze those lumpy pops until we had them for dessert one night.  The children were so excited (and then they got sugared up and even more excited!). 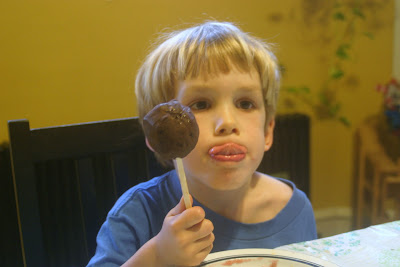 Now I have explored cake-pop territory.  It might be friendly for future leftover cake, but I'll stick to the map more closely next time. 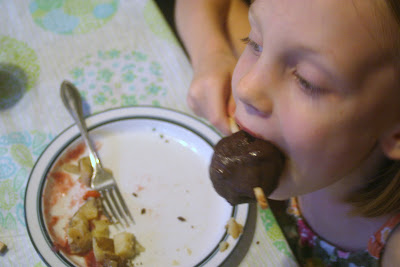 Have you made cake pops?  Tempted? (I don't mean tempted by mine - they're not pretty like the fancy-pants kind.)
Posted by Margo at 9:00 AM