I tell you it's tasty soup (Cabbage and Barley Soup from More with Less), but I made the mistake of using purple cabbage.  At first the soup was a light lavender, but then it turned an odd shade of grey.

The former cabbage, barley, and carrots became unidentifiable things floating in sludge.  Isn't that what storybook orphans were fed? 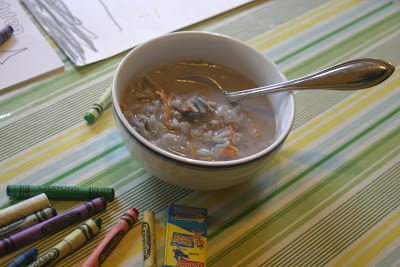 No one pounced on these leftovers, and they died in the compost pile.

Email ThisBlogThis!Share to TwitterShare to FacebookShare to Pinterest
Labels: cooking