Joy of Cooking Pie - just rhubarb with a double crust.  Simple, but I cut the sugar too much - the balance between tart and sweet is hard to find for rhubarb. 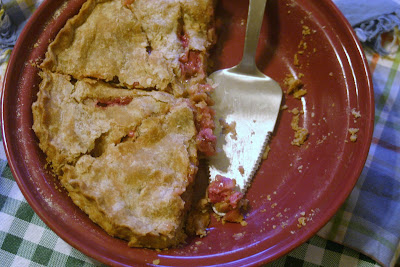 Rhubarb Kuchen - like the peach kuchen from More with Less, only with a bit more sugar.  Still one of our favorite pies. 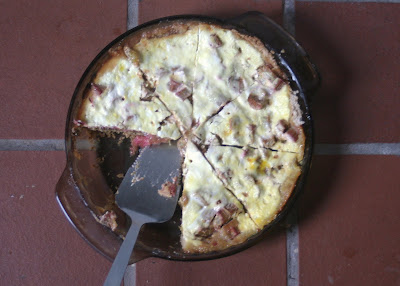 Jennifer Jo's Rhubarb Cream Pie (it was too hot to take pictures, if I recall)  This was my favorite of the rhubarb pies and I'll be making this again.  It was luscious.  It's very similar to a recipe in Simply in Season, only with more cream.

Strawberry-Rhubarb Pie - my husband's favorite and really not as fake-strawberry tasting as I feared. 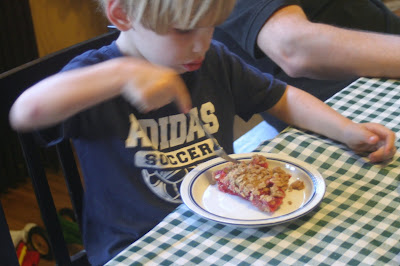 However, I still flinch at the idea of baking  strawberries. Surely there could be a way of making a thick rhubarb sauce on the stovetop, and then folding in fresh strawberries, putting it all in a baked tart crust and serving chilled. 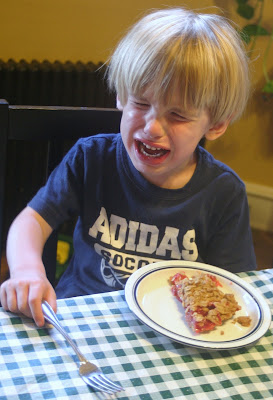 (It was late in the day and he dropped a bite)
Any other rhubarb pies out there I'm missing?  Beeboppa, reeboppa, rhubarb pie. . .
Posted by Margo at 8:40 AM