Cream Puffs in a Pan

This dessert was what I made for Easter dinner (am I the only blogger still rehashing Easter?  we had Easter leftovers for supper tonight). 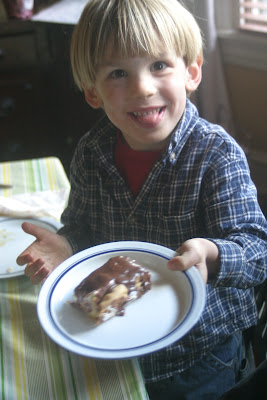 It's called Chocolate Eclair Dessert.  It's a fabulous crust like a cream puff, with gooey goodness spread on top.  I followed the recipe, but I want to try other combinations, especially when the summer fruit comes in.  Lemon curd, strawberries, and whipped cream would be fantastic. 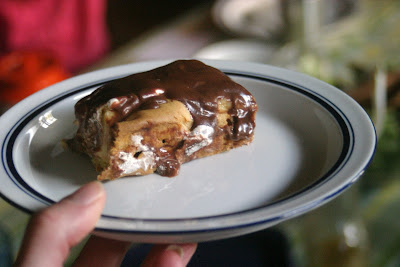 This recipe is pretty close to what I made, except that I used vanilla pudding and I spread my crust-thing in a 10x15 jelly-roll pan.  I also pressed down the bubbles when I took the crust from the oven.

Now that I know how the recipe works, I can substitute thick homemade pudding and real whipped cream for the commercial stuff.  I would also prefer a real chocolate ganache to the icing.

I think I'm going to rename this Cream Puffs in a Pan or Pan Eclairs - to make it sound fabulous, as well as to distinguish it from my beloved Eclair Dessert.
Posted by Margo at 9:42 PM