I fumbled around with a version of this recipe early in my married years.  Then when I was reading More with Less a few years ago, I saw Brown Tomato Gravy.   (Do you own a More with Less?  It is by far the cookbook I use the most, but I am biased because I am Mennonite and because this was the first cookbook I used).

Here is my version, which is a method more than a recipe.  I love tomato gravy! 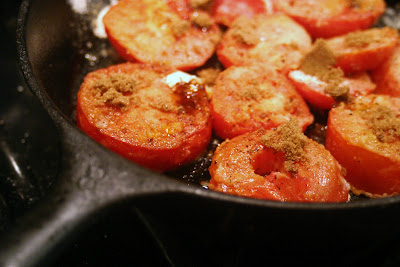 Lay floured tomatoes in butter on medium heat.  Sprinkle with salt and freshly ground pepper.  Allow to fry until the flour and butter are forming browned spots.

Turn the heat down to low.  Pour in some heavy cream, probably not more than a 1/2 cup or even less; sometimes I've used just 2 little glugs.  Break up the tomatoes a bit while the cream bubbles and thickens with the flour.  There will be tomato skin pieces, which don't bother me, but I'm sure some people would skin their tomatoes first.  Serve over toast, biscuits, or hash brown potatoes. 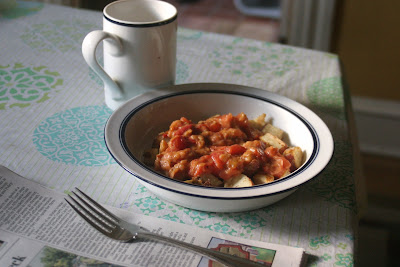 We ate the tomato gravy for breakfast over oven-roasted potatoes which were room temperature.  My husband bought 7 lbs. of new potatoes this past week, so I roasted extra and I'm going to see what inspiration strikes, a la Tamar Adler. 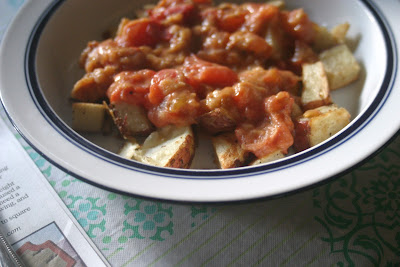 The kids kicked a fuss over this breakfast; they wanted Cheerios.  I ignored them.  They ate heartily at lunch and supper, so everything is all right.
Posted by Margo at 6:48 AM