Mayo in No Time at All

I've been making mayo for years in the food processor, but when I blogged about it two summers ago, several of you suggested that I try stick blender mayonnaise.

I was struck pretty much dumb the first time I tried it.  It's so easy!  So fast!  You just put the ingredients in a jar, shove the stick blender down in, and pretty much before you can say "mayonnaise," it's done! 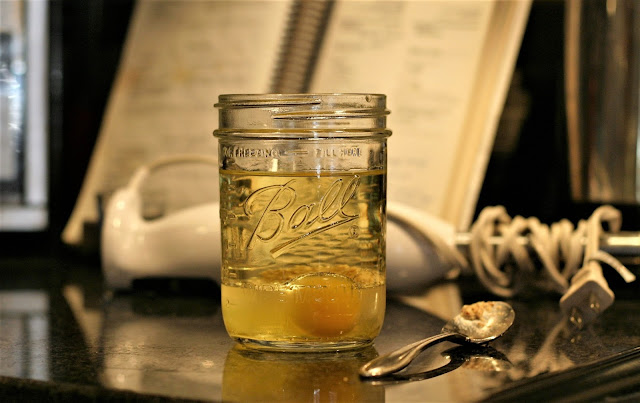 So that's how I make mayo now; it has never failed me in quality or speediness.  It's magical to watch it form in the jar! 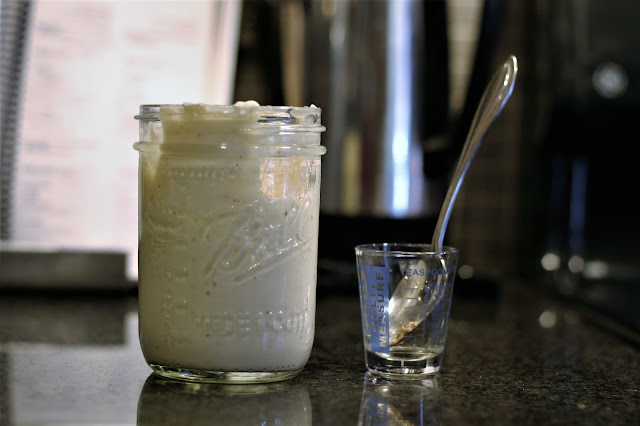 Measure into a wide-mouth pint jar (I use the line on the jar):
1 cup neutral veg oil

Put immersion blender in jar, firmly on bottom.  Hold blender to bottom of jar while blending until you see creamy mayo rising up to 2/3 of the way.  Pull the blender up through the mixture to get the top layer of oil emulsified.  Give a few more blasts on the blender through the whole jar, but do not overbeat. Done!  Put the lid on and store in the fridge. 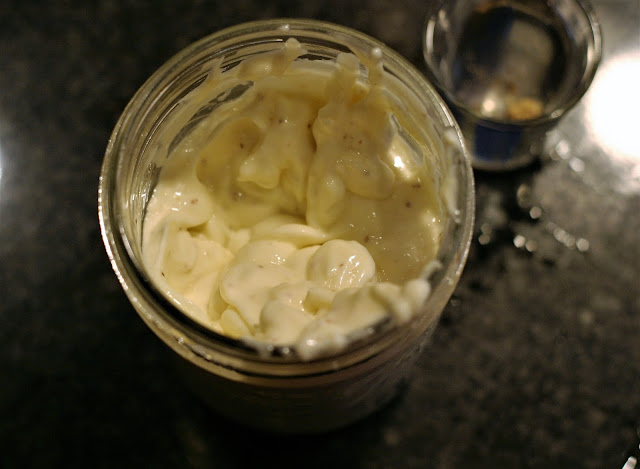 Is it as good as Hellmann's? Preferable?

FRESH lemon juice? What about lime?

I have just pinned this! But how long does it keep? Hellmann's lasts a good while.

sk, I was never loyal to a mayo brand so I don't know! We think it's delicious or I wouldn't bother making it, even for the glass jar and the local egg.

I use bottled lemon juice, my BFF uses fresh. I have never used lime. Generally limes are less acidic than lemons, so that might affect the emulsification.

Lisa, my experience with homemade mayo is that it keeps forever in the fridge just like commercial. Just be careful to use a clean utensil every time so you don't introduce bacteria to the jar that could grow into a mold.

Wow. Even I could do that! It sounds silly but one thing that holds me back from things like home-made mayo is the use of the food processor. I don't like that machine! It's to complicated and too hard to clean, and it takes up too much space. That said, I'm a canner and a jammer, so I have jars galore and a stick/immersion blender, so this is perfect for me.

I don't use much mayo, though. I'm pleased to read that it keeps well in the fridge, but is the recipe scale-able, or does this amount depend on the volume of egg?

Thanks for posting! I will definitely try this recipe!

e, I'm not sure if the recipe scales up or down. It's all over the internets as "magic mayo" so I'm sure someone has tried it. Please report back!

I love mayo and I can't wait to try this. I read in a comment above that it keeps a while - had no idea. Seems like it would be great in summer with tomato sandwiches.

I worry about raw eggs and salmonella because "they" are always warning consumers about that. I wish I didn't, because this looks so delicious and easy.

jenny_o, when I did my research a while ago, I found that salmonella bacteria comes mainly from large farms where hens live under unhealthy conditions (CAFOs - concentrated animal feeding operations). Eggs from small, local farms with healthy hens and healthy husbandry have almost no cases of salmonella. Also, the actual infection of salmonella in people is usually mild, unless people have compromised immune systems. So while salmonella is a risk, it's a pretty mild one from what I can tell.