A Hair Towel for Genevieve

When Genevieve's hair was washed, I would wrap it up in a towel turban that never stayed on her head.  So her hair would drip on her shoulders and she would go around with a damp nightie or tee-shirt, depending when she had her shower.

I stumbled across this hair towel tutorial.  I made one using a random lavender towel that came back from a cabin vacation that my aunt thought was hers but could not be bothered to shlep back to the cabin.  So: unwanted towel in a color my daughter loves. 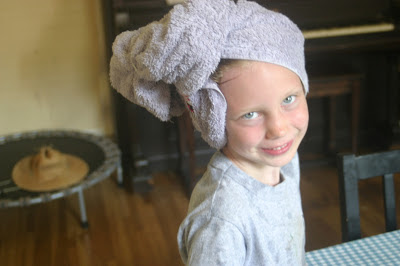 I cut the hair towel/hood on the finished sides of the towel, so I didn't need bias tape to finish the edges (although the tutorial has very nice, clear directions for doing that).  For a little sweetness, I stitched on a cupcake with several casual lines of sewing. 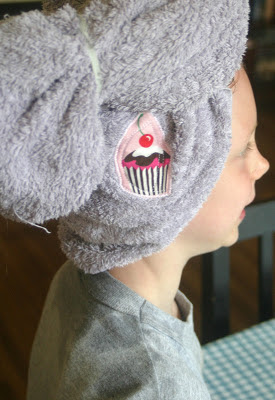 I made the elastic loop the 8" as stated in the tutorial, but I think it could be shorter.  Also, my towel was quite thick and thirsty, so it doesn't twist up as easily into the top loop.  And I did need to shorten the back hood seam to accomodate Genevieve's small head, although I hope it's big enough to carry us through years here.  The towel is definitely an improvement over slipping turbans and wet shoulders!  I do recommend it. 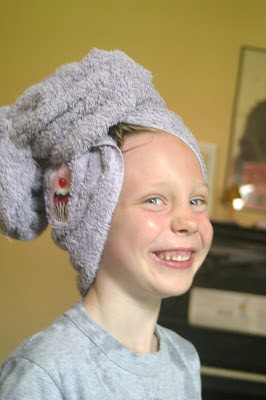