Genevieve was asking for a baby doll for Christmas - not big like Bella, not a girl like Helen Jane, but a little cuddly baby. 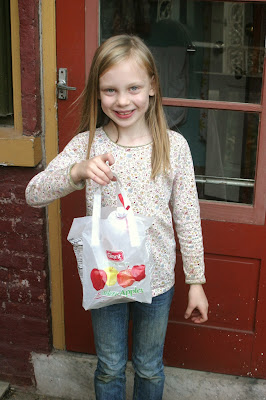 Then, one Saturday in November, she asked me urgently for some socks to make a craft.  And with no help from me, she made her brother a sock baby.  She stuffed it with wool scraps and drew its face on with a Sharpie.  She cut some fabric into a robe and sash.  Then she made a sock baby for herself.

Boy, was she happy!  She told me triumphantly that she has a baby now and doesn't need one for Christmas.  We had a convivial little talk about the satisfaction of creating things with our hands from scraps.  I was so encouraged that she is picking up our values and skills! 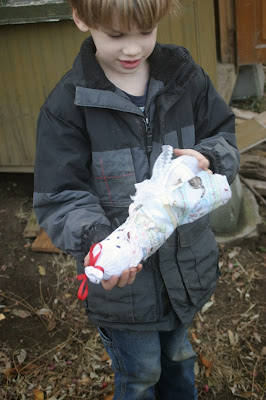 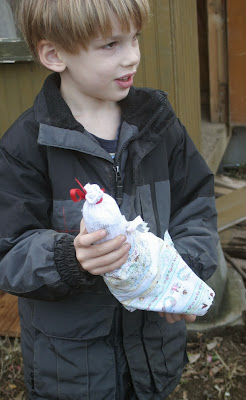 Because this is an unusual moment in the last few months.

I've noticed that Genevieve is really interested in money and buying things for herself.  We are trying to guide her to save money for worthwhile things or to be generous to other people with her money, but I'm not sure we are making any headway in a world where there is so much pressure to consume and be selfish.  She has some very nice toys that she never plays with at all, but she still begs for more.

I try to walk the line between acknowledging her natural childish state (and mine!) and guiding her to be content (as I want to be also!). 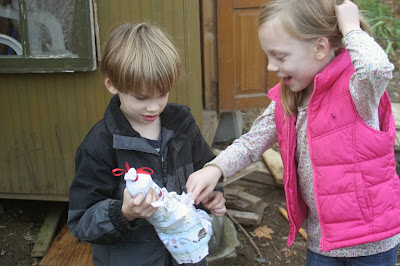 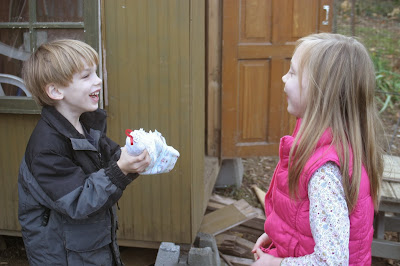 Ben named his sock baby Appolonia, by the way, which he learned from a children's book we have called The Egg Tree.  Genevieve named hers Hope.  And now their family is complete - they have babies.
Posted by Margo at 10:44 AM